It's Saturday at Grace Mission Tohoku and that usually means it is Community Cookout (Takidashi) day, where the mission cooks for the community and play bingo. You would think that it's been so long after the tsunami and lives are back to normal what is the need for having a cheap meal like this? Well today was a perfect example of the blossoming fruit of community building. 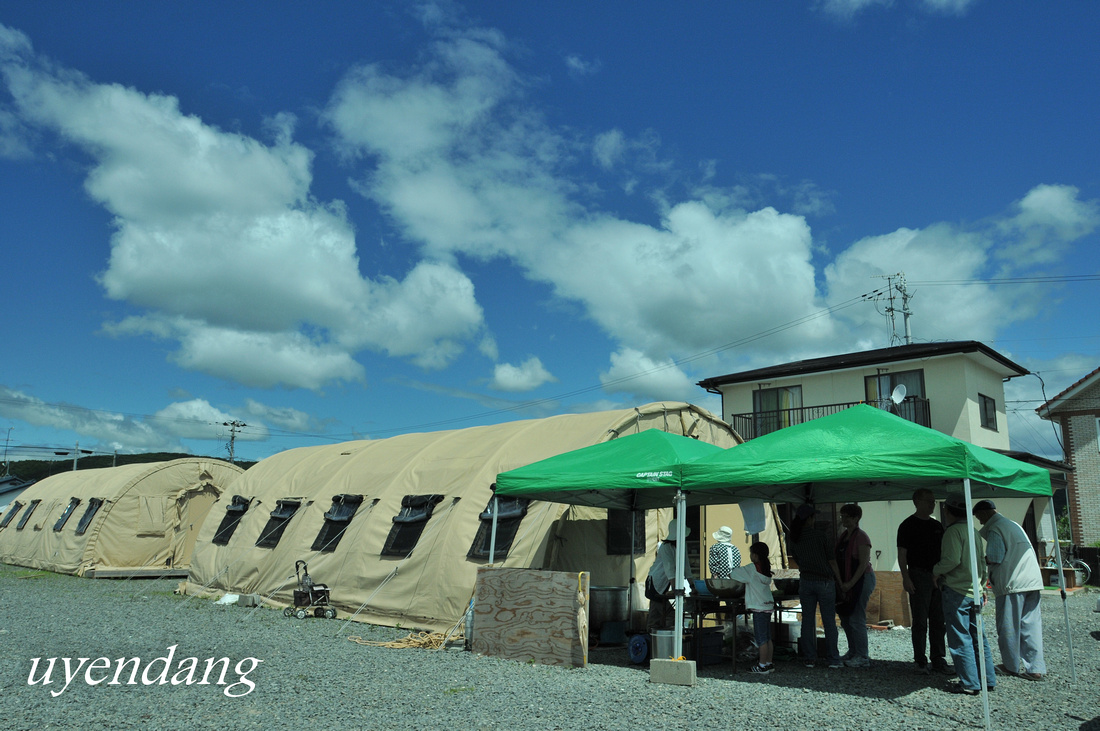 Not to long after us volunteers had our devotion and breakfast at 8 AM, the neighborhood people started to trickle into the community tent. Satoko and Satoshi were bringing over the big outdoor burners, tents, the meat, potatoes, and other veggies. While half of the team were assigned to go mud out, another gardening, I was priviledged to be able to hang around to photograph the event. 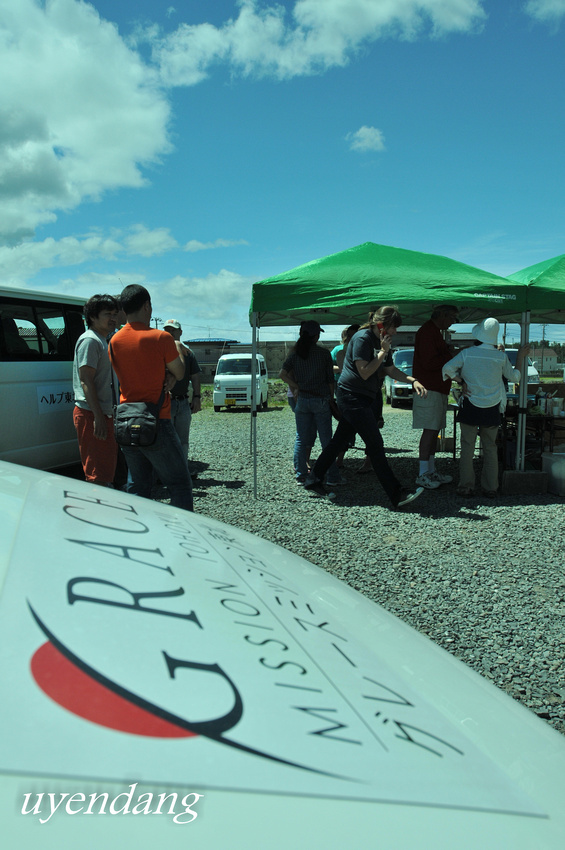 Indeed it was a beautiful morning, as another volunteer group came by, and people from Tokyo who regularly helped started to flow in and out of the tent. So Lisa and I started to set up each of the tables decorating them with little snacks, cream & sugar sticks. Amy who has not been out to mudout since her first day, finally got a chance to do something more productive and helped with the curry. That is when we met, Cory and her adorable 8 yr old daughter Katrina. She took a liking to Amy and Lisa instantly. 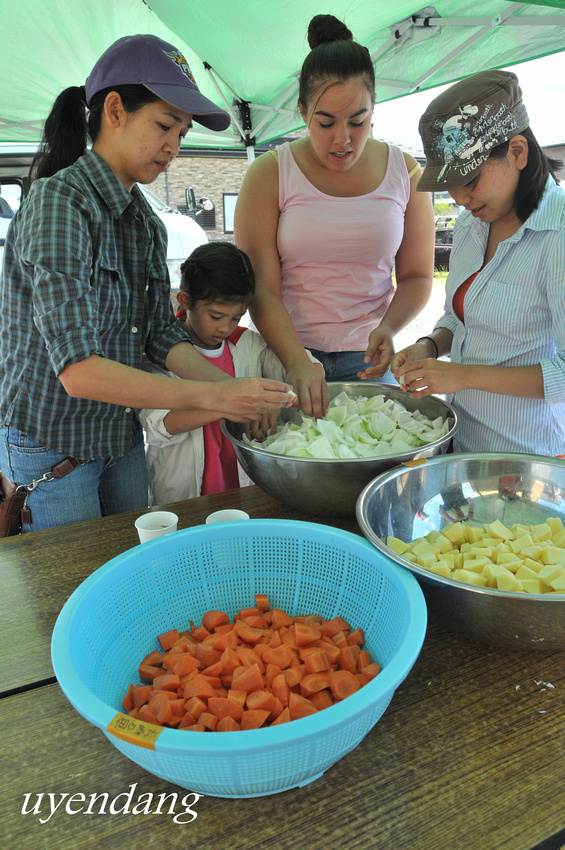 People began swirling around to setup the coffee and tea area, the massage tent setup, the bingo prize area, and the outdoor stove. Every piece of the event had someone from the community participating. There was a pride and joy in their eyes and smiles on their faces as people buzzed into the tent. All I can do with my big camera was smile at them even though I was introduced to them already. 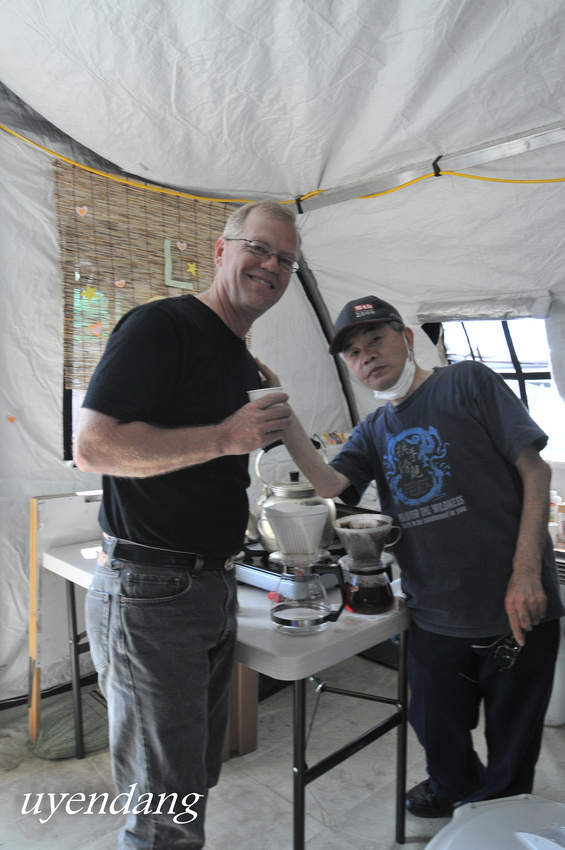 Andy and the coffee master

Andy Gilbert (aka Bingo Boy to the Japanese women) pictured here with and T-san the coffee helper. And manning the pot of beef curry is A-san, who made sure that the ladies and the food didn't get burned. 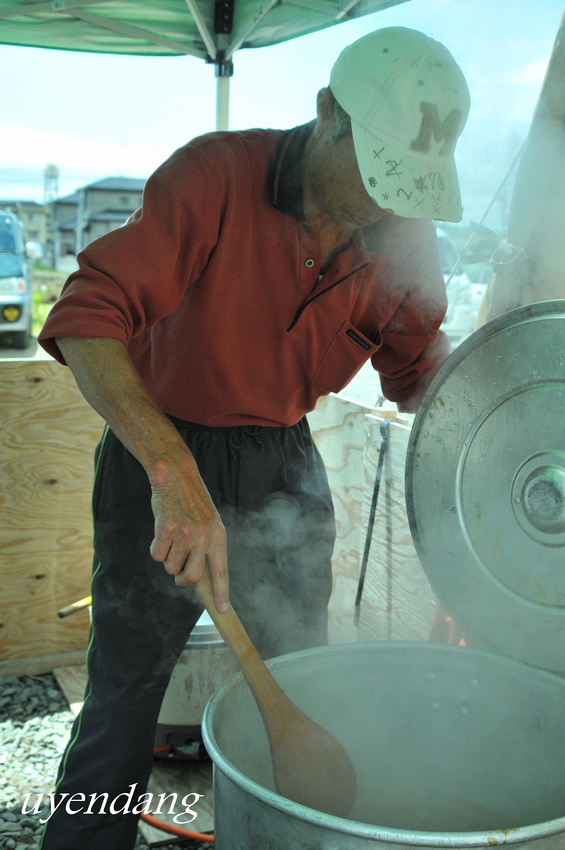 And there was the sweetest lady, S-san, who helped with the chopping and mashing up the curry cubes with Kazue who came in from Tokyo that morning. 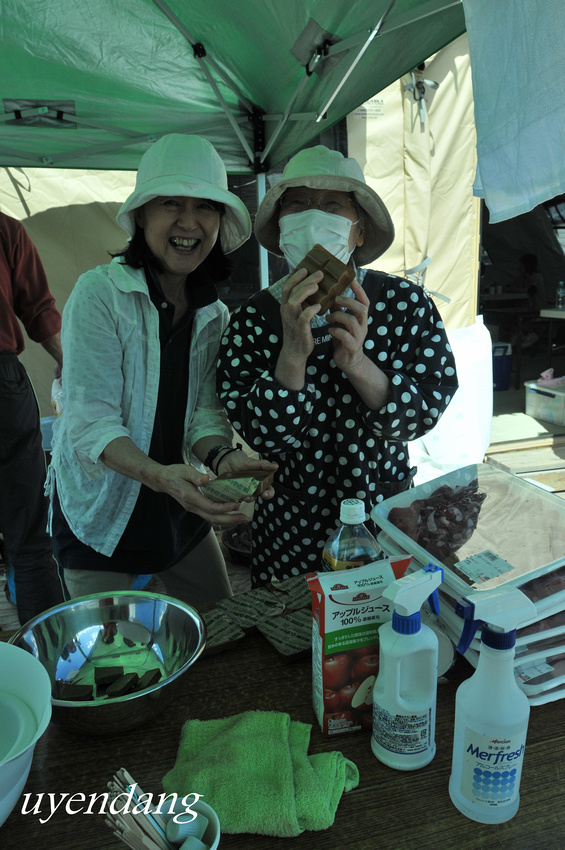 Making the curry with the local volunteers

Lisa told me a great story about how the community initially would come so early knowing that they would get a good meal would stand in line waiting for the cookout to begin. One of those days, someone in the line had the bright idea to write a number on the hands of each person in the order that they arrived. Initially that Lorna, Andy's wife, did not like the idea, feeling that would be disrespectful. However the people in the community wanted to be orderly and did not mind. One person even created a board for Lorna to keep track of those who already been marked. 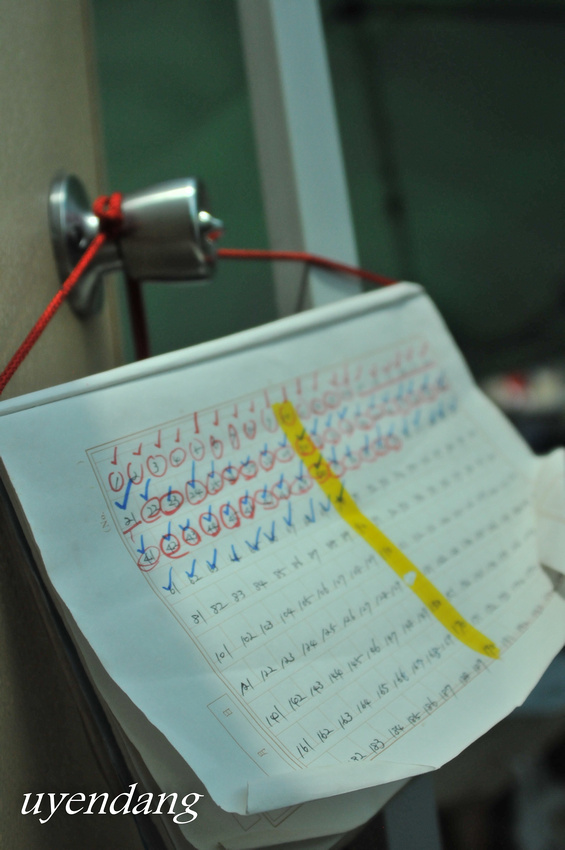 What was also an amazing side effect of this was, this gave the volunteers to physically touch a person's hand when they wrote their number on it.  So instead of seeing this as a cultural taboo, it turned out to be a means of healing and physically connecting with the individual. 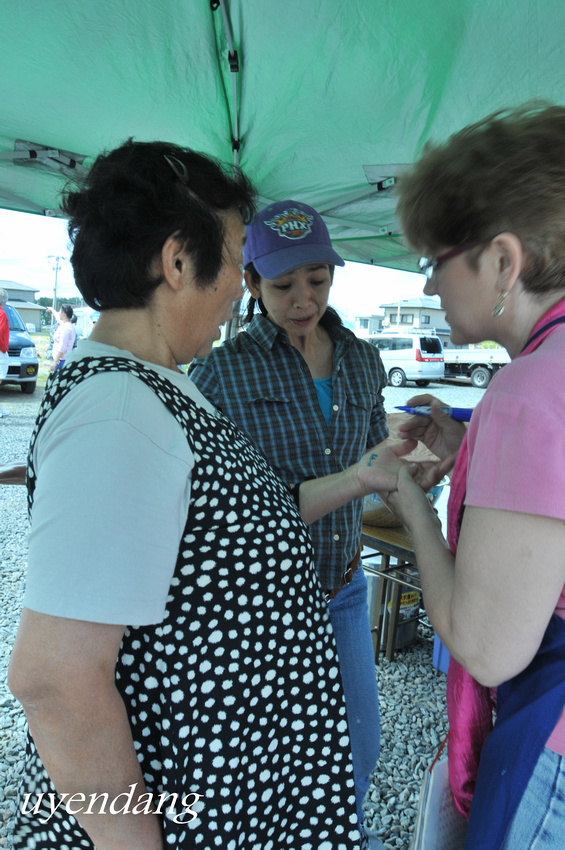 Lorna greets M-san, who also is the woman who has lent her home to use as the GMT Hope house which is one of the three homes used by GMT to reach and build community here in Watanoha. 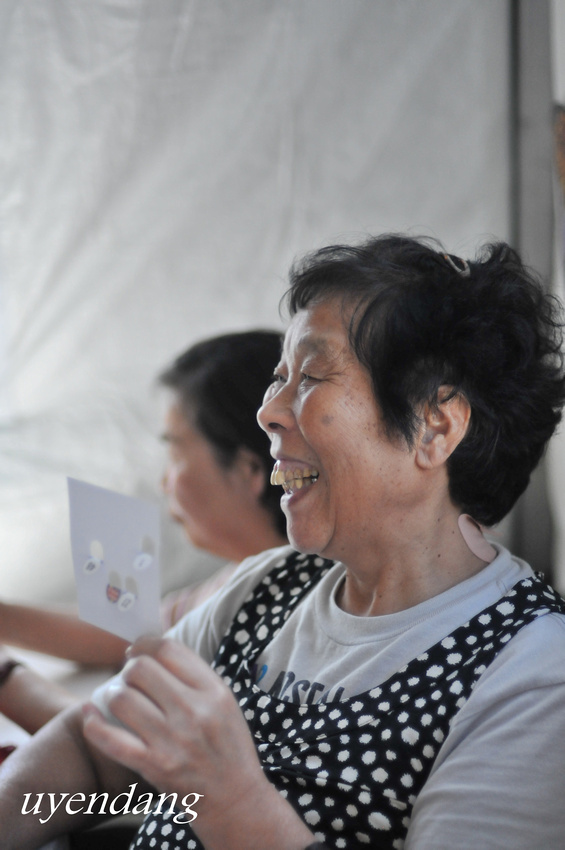 The best things are seeing people faces light up when they greet one another, see familiar faces, or volunteers that they have not seen since last week. What was also neat to experience was to see how GMT worked with groups like the women from FANCL (a beauty company) to give the hand massages or during the week an accupunturist who give free therapies. And Cory even mentioned to me how there was a group of young professionals who do a kids program held shortly after the cookout time. 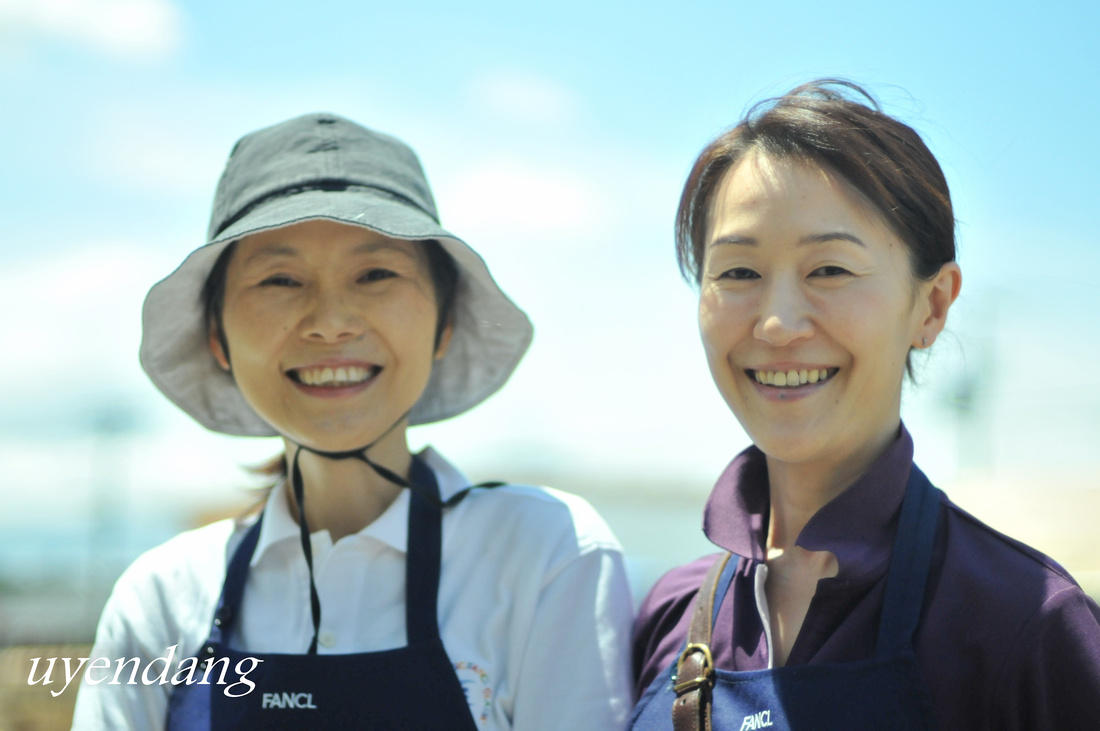 Today, under the gorgeous mild blue skies, the sweet song of kids laughing, the community cheering "bingo", and jolly conversations demonstrated how the work of this mission is about building trust with the people, collaboration with the locals and with like minded volunteer groups enabling the community to connect and care for one another. 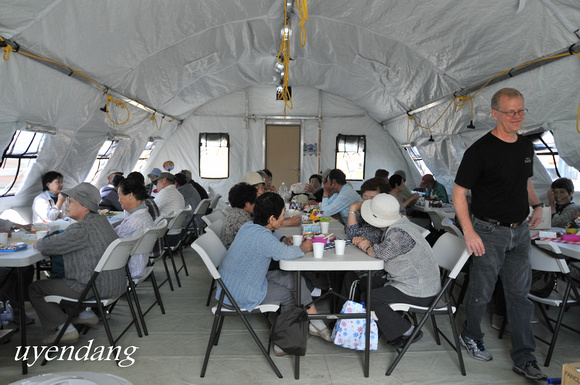 But this day came through many months of work through the perserverance of the workers and volunteers who setup these meals in the most extreme conditions as Virginia had explained to me. Before that community tent was made available to them, she had to set up the tents in winter in raining conditions and the like. Working together with Samaritan's Purse they are able to utilize these tents in such an amazing way. 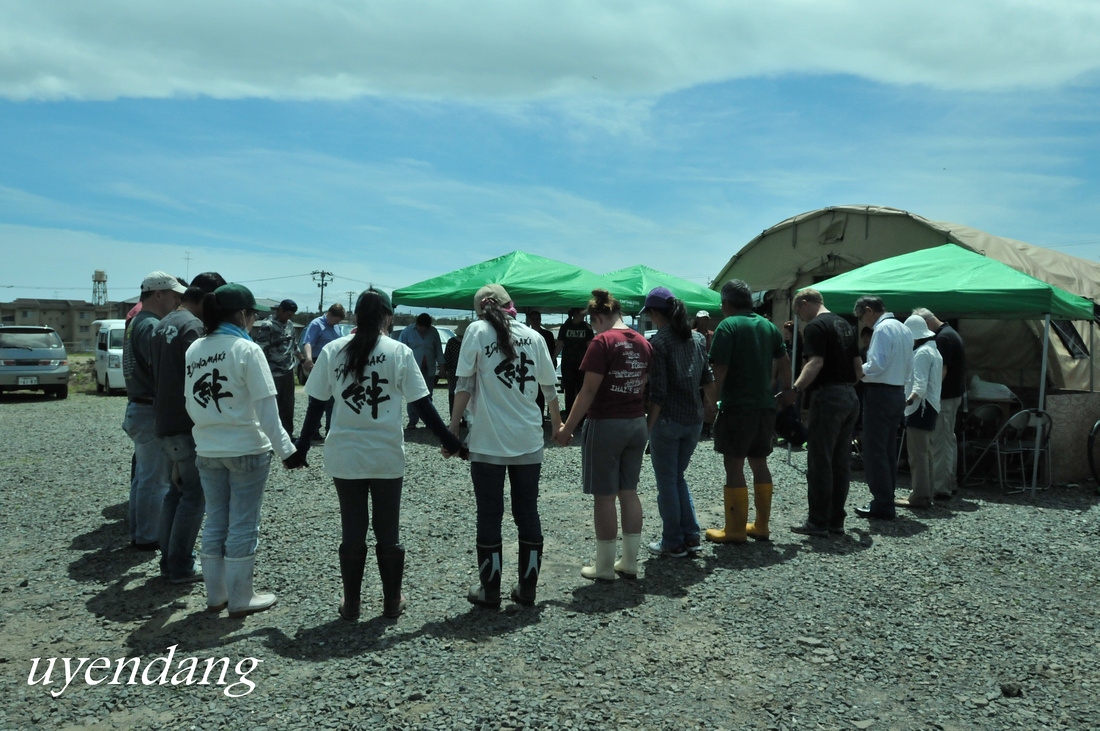 The full galleries of the preparation and ladies of FANCL are here. 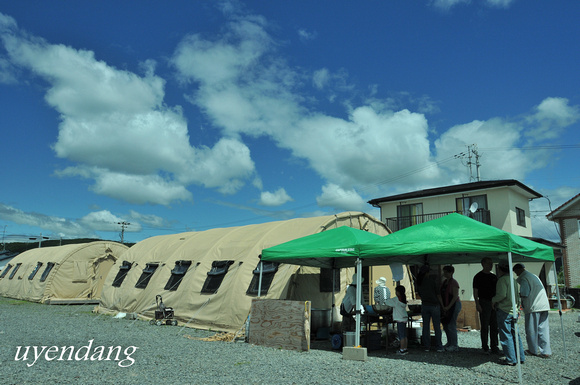