On my first day to tour the city, I was a little overwhelmed by all the bus and rail routes that serviced the city. When I finally departed to tour the city, I was able to make it Bondi Junction, and thinking that it would be best to take the 333 straight into the city. However, I did not take notice that the bus I hoped onto was the 333 heading to Bondi Beach. So I ended up going the opposite direction, which was a blessing in disguise as I soon realized when I got off the bus at Bondi Beach.

As I got off the bus and saw the view of Bondi Beach, I could see why people love Bondi Beach. Even in a cloudy chilly winter morning the beach was the aquamarine blue, with surfers in the breaks. As I walked closer to the pavillion that was setup on the beach, I amused to see that they had set up an ice skating rink for their "Winter Festival." It was ironic to see ice skater in my foreground while in the distance surfers were eyeing their next wave. As I go to take a photo, I had a "DOH" moment - no memory card in my camera.  Luckily I had my photo-and-shoot with me but the battery power was running on one bar and was able to take a few pictures before it completely died on me. 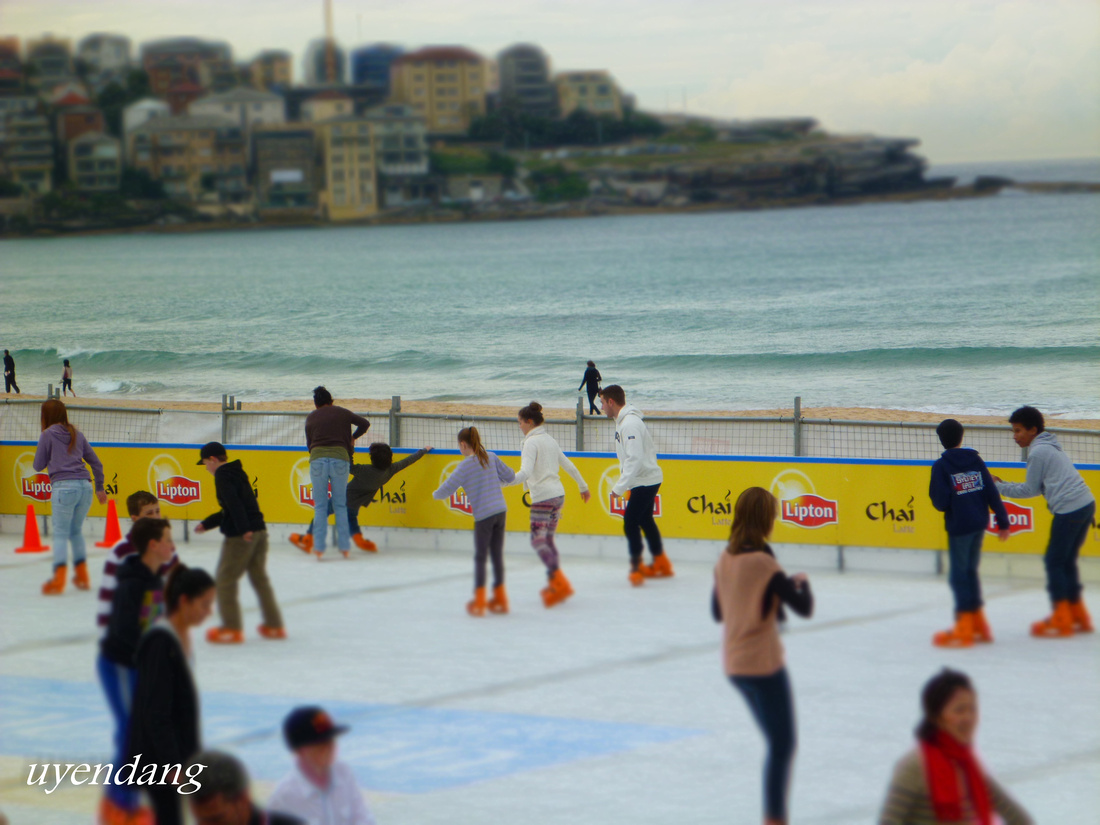 Fortunately, I was only a few blocks away from where I was staying before I realized this, I would have been super bummed if I had made it into the city to realize I had no memory in my camera. After retrieving the memory card from the flat I was staying, I decided to take the railway instead of the bus into the city.  Figuring out that Martin Place was centerally located, I decided to step off at that station, which was close to the Circular Quay and the Sydney Opera House.

Due to the gloomy day, I thought it would be best to goto the Hyde Park Barracks Museum. I meandered around until I located the museum. Getting a bit hungry, I noticed a cafe next the museum, http://www.hydeparkbarrackscafe.com.au/. Thinking it was just coffee and pastries, I was pleasantly surprised it served upscale dishes. Treating myself to compensate for my misstep this morning, I chose to have a sit-down lunch. One thing I learned about my experience with that meal is that an "entree" in Australia is equivalent to an appetitizer in the US. So what I thought would be a well portioned scallop dish was a lot smaller than I had imagined it would be. But that gave me room for dessert - a warm date pudding served with vanilla ice cream. YUMMY!

All fueled up, I strolled over to the barracks museum to learn about Australia's origins as a penal colony where over 165,000 convicts were sent to the country in exile. At the Hyde Park Barracks Museum you learnd that it wasn't just male convicts, but children and even female orphans. They had to build their country from the resources found in Australia. 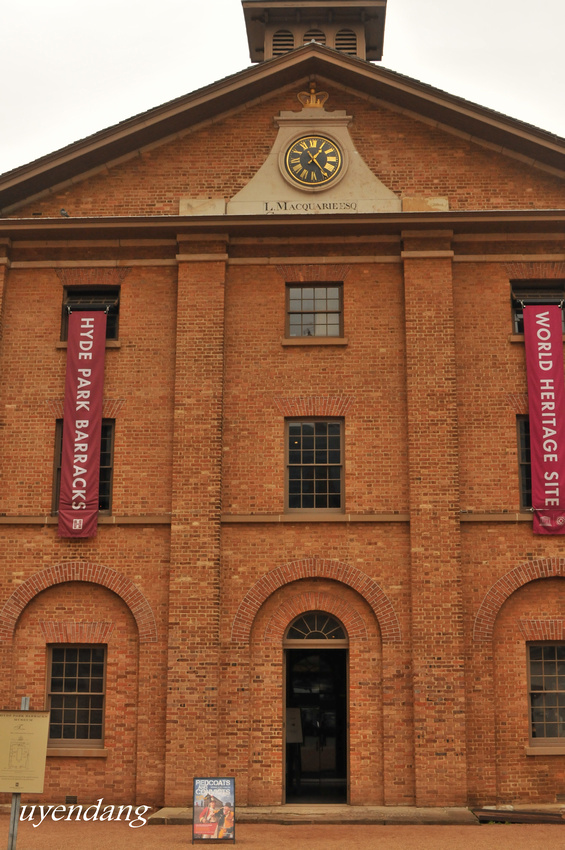 Also I will never look at a treadmill the same way ever again. Watermills were powered by men who were being punished to walk on these treadmills. The building itself still has parts of it structure as it was originally built such as the roof timbers and white washed walls. The barracks of course showed how close people were quartered, and of course they emphasized the rat infestation throughout the building.  Much was what was learned about the history were uncovered through collections buried by rats under the building. 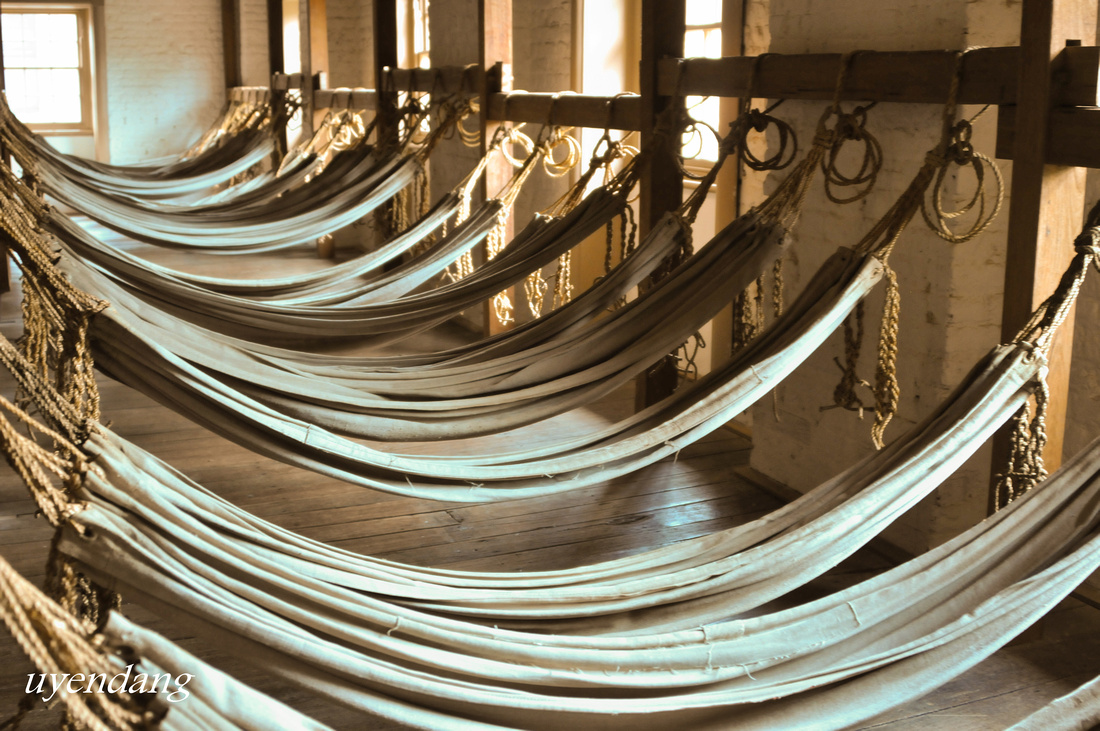 The tour was fascinating to me because it reflects how a culture and society can overcome their circumstances, plights and origins.

My iconic image of Australia besides the kangaroo is Sydney Opera House. I am drawn to the billowed sail design. If I had to chose to do one thing I had to do in Sydney, seeing it in person would be my pick. After making my way through the Botanic Garden grounds, I approach it from the Government House emerging from the Farm Cove. Evening was setting and it looked so lovely to be up close and personal. Walking around the steps and taking my close-up pictures, I contimplated about seeing a performance. I eventually decided to go ahead and watch the performance even though I was not familiar play, the Duchess of Malfi.

And of course enjoying my chill time at the opera house before the performance, I found there was a lovely restaurant on the ground floor with a view of the Sydney Harbor Bridge and the skyline. There I enjoyed a pre-theater meal of smoked salmon and white wine. It was a lovely evening indeed! 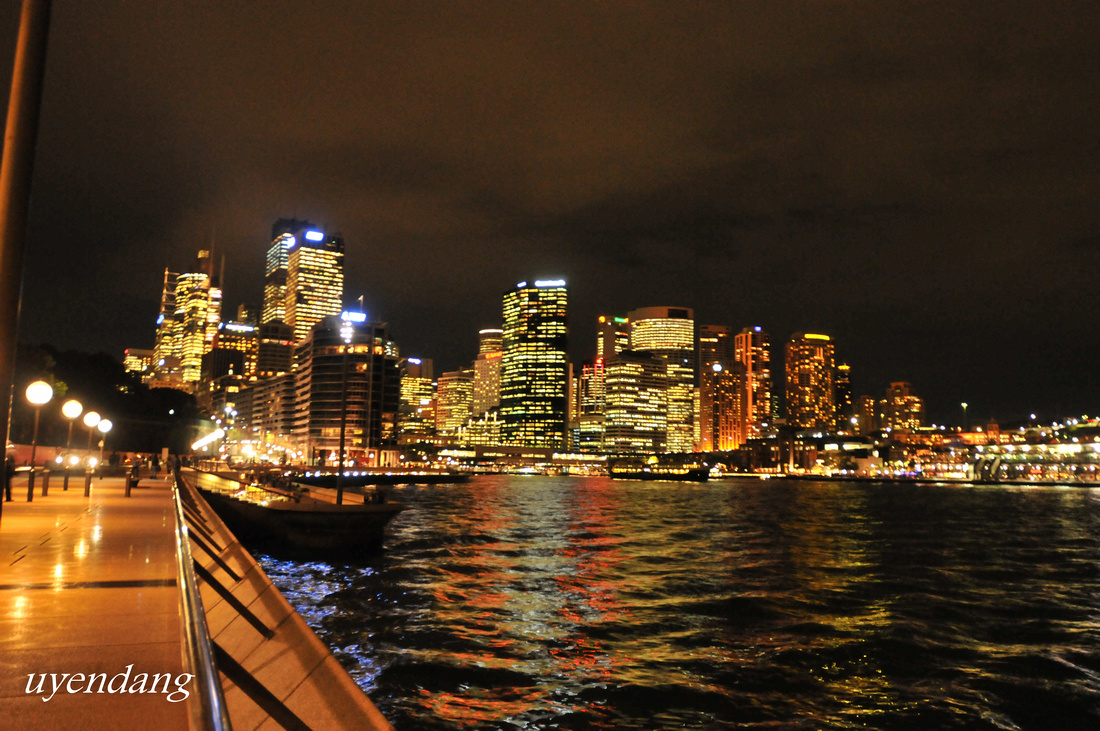 Since the play was a modern adaptation of the 16th century tragedy, the story was about complex entanglements and eventually no happy ending. Although it was interesting how they modernized it, this type of play would not likely be one I would check out given a choice. But I enjoyed my day after all, even though it did not start off on the right wave.

The next day when I took the ferry over to Manly beach, I had the chance to see the Sydney Opera House in the daylight and at sunset when I returned. It was even more stunning to view it from the water. My most spectular shot of the SOH was at sunset when the shadow of the Harbor bridge was casted in a red glow of the sunset from the cove opposite of it. 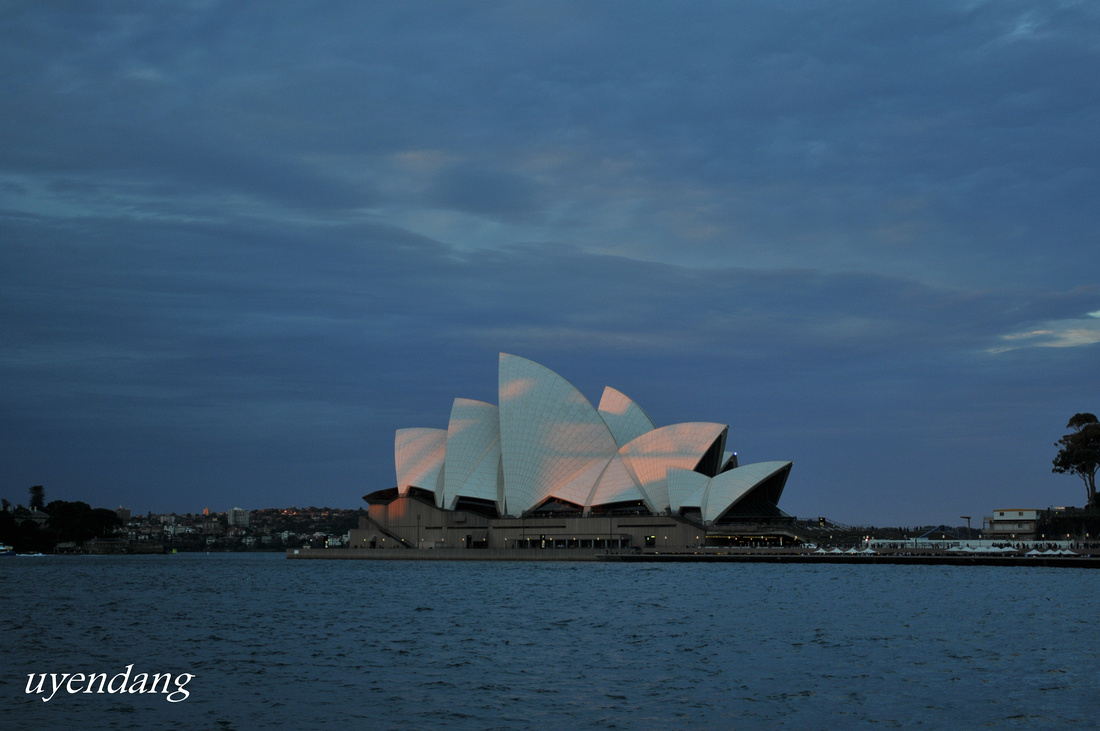 Red dusk and bridge shadow casting on the Opera House

Enjoy my selection of photos from the first day in Sydney and shots of the opera house!