It seems to me that I don't take to well to red-eye flights. My first day in Cairns was completely about getting rest. My exhaustion was the product of a long five hour journey from Kawaguchi to Narita and soreness setting in from my climb. I was hoping to get into a bed as quickly as possible for my entire time I was standing in line at customs I had one eye open and the other shut trying to get adjusted to the 5:00 AM arrival.  Without too much ordeal, it was nice to know I was being welcomed by my Airbnb host, Rachael at the Cairns airport.

She had mentioned to me on the ride to her home that other people were staying at her home during the same time I was renting a room at her place. There was a mom with two daughters, one of which had just finished her YWAM program and missions. Also staying at her home was her friend's dad and brother who were in town for a Ukulele festival. Both of these people greeted me when I arrived at her house, but all I could muster up was a hello and thanks for the offer for breakfast.  Needless to say, I slept until dinner time.

That first evening which felt like it was an entirely different day, was when I met the other guests. I met the Schmidt women that evening when Rachael picked them up from the train station. They were very bubbly and had lots to share about their trip that day to Kuranda. When we all were back at the house, all of us shared dinner together. This was a nice surprise to me because I was under the assumption that my meals were on my own rather than homestyle. 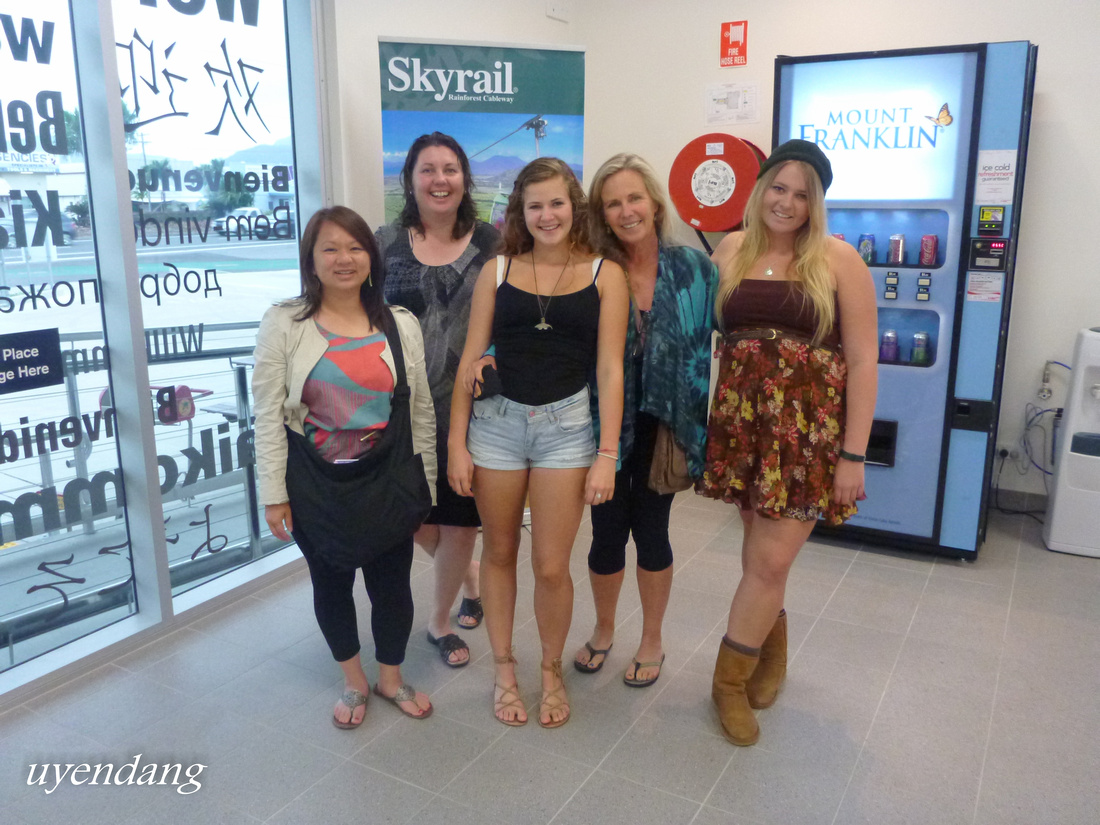 Later that evening the other two men came back from their visit out to the Ukulele Festival out in Cairns to see what the schedule and events at the festival will be like on Saturday. The festival was attempting to beat the world record of the largest ensambled ukulele players to play a full 5 minute song. Ian, the dad, gave us a home concert of a number of diddies he created over the years. What a treat that was to hear his little songs. And I even got him to sign one of the songs he wrote for the his church kids. Without any specific plans for my weekend in Cairns, the little home concert peaked my interest in checking out the Ukulele Festival and the world record attempt. 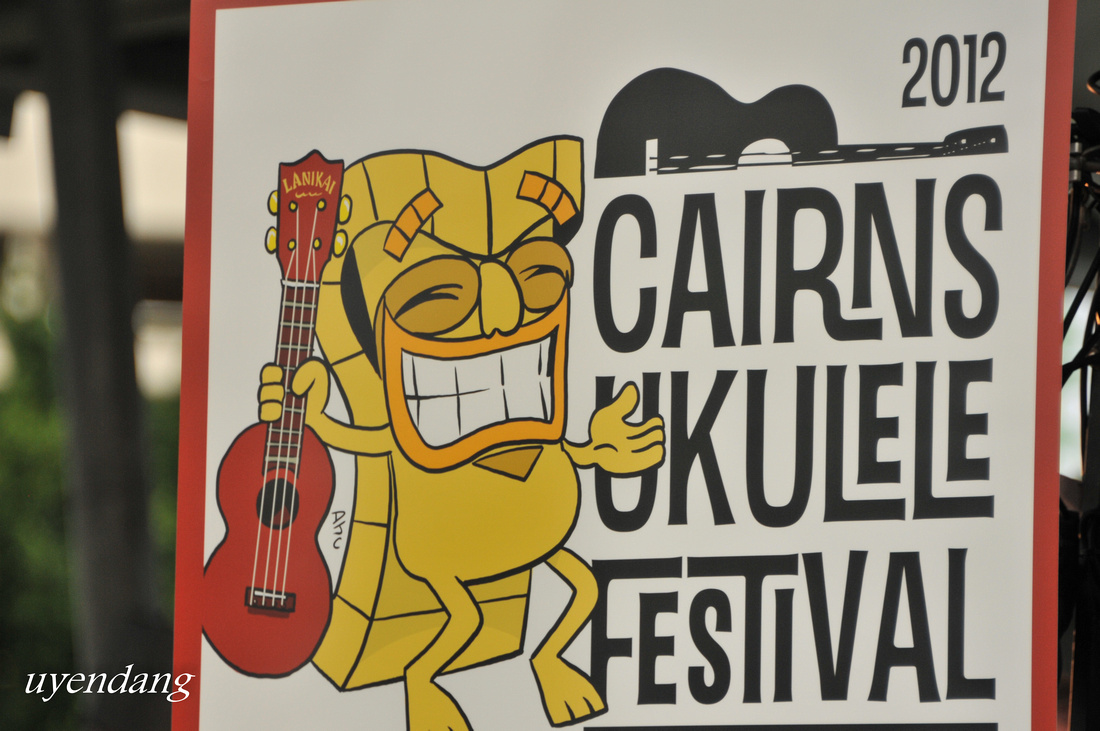 So after a morning of clearing out Rachael's garden, we made our way to the festival. How cool would it be to witness a world record. 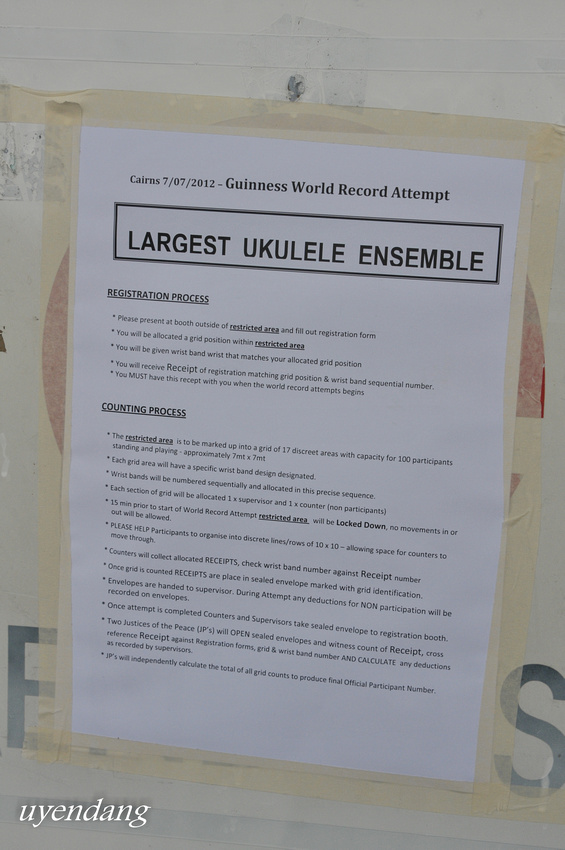 We met up with Ian and Anthony under the big tents they had reserved for the ukulele festival. 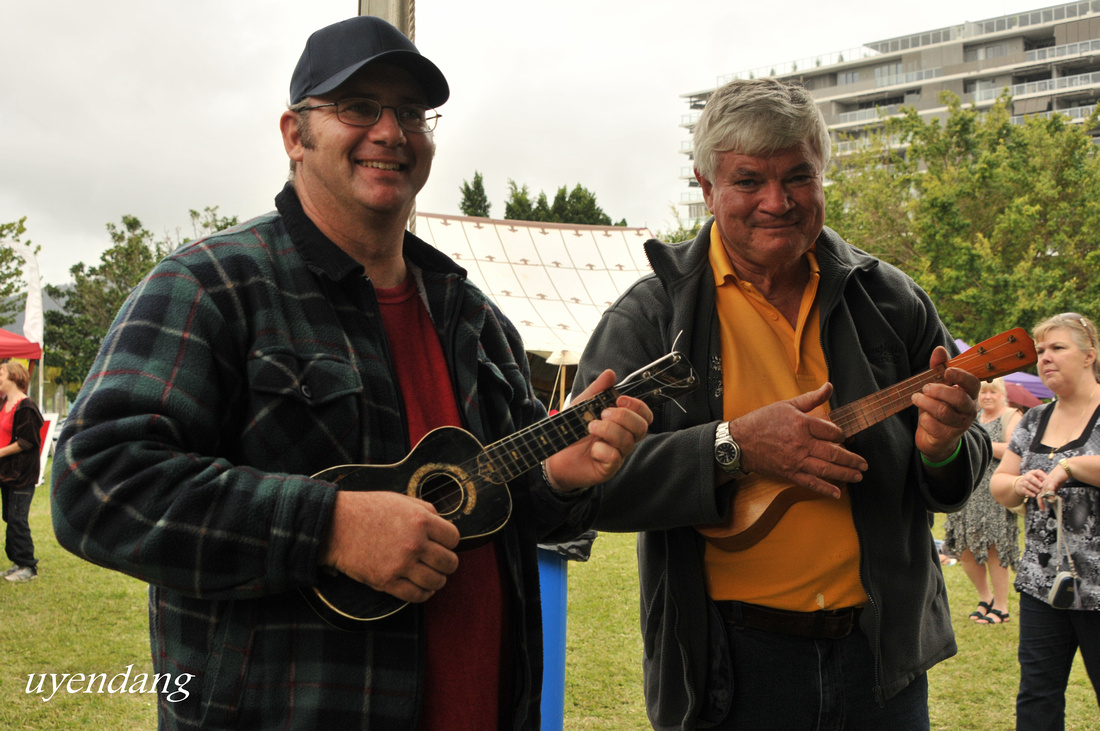 Everyone was either carrying a uk or buying one to participate old and young alike. People came from all over the world for the festival, it was so colorful and lively. 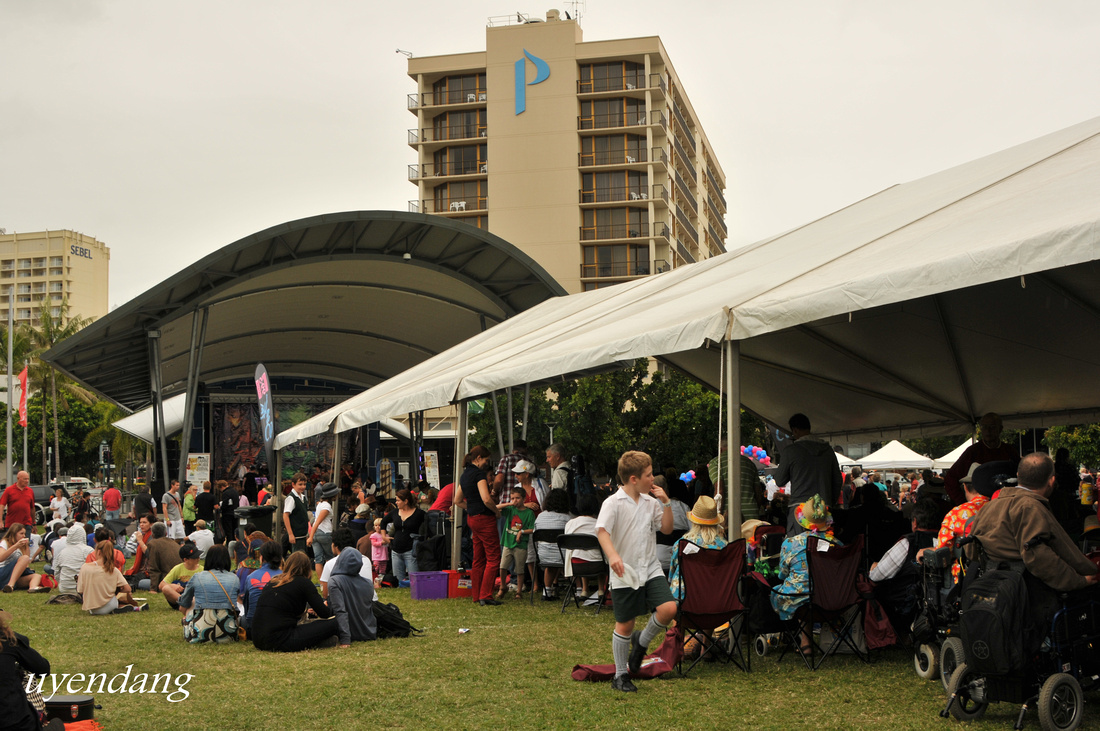 While they were waiting to be corralled, there were entertainers on the stage teaching the crowd how to play the two chords that made up the song for the record attempt. 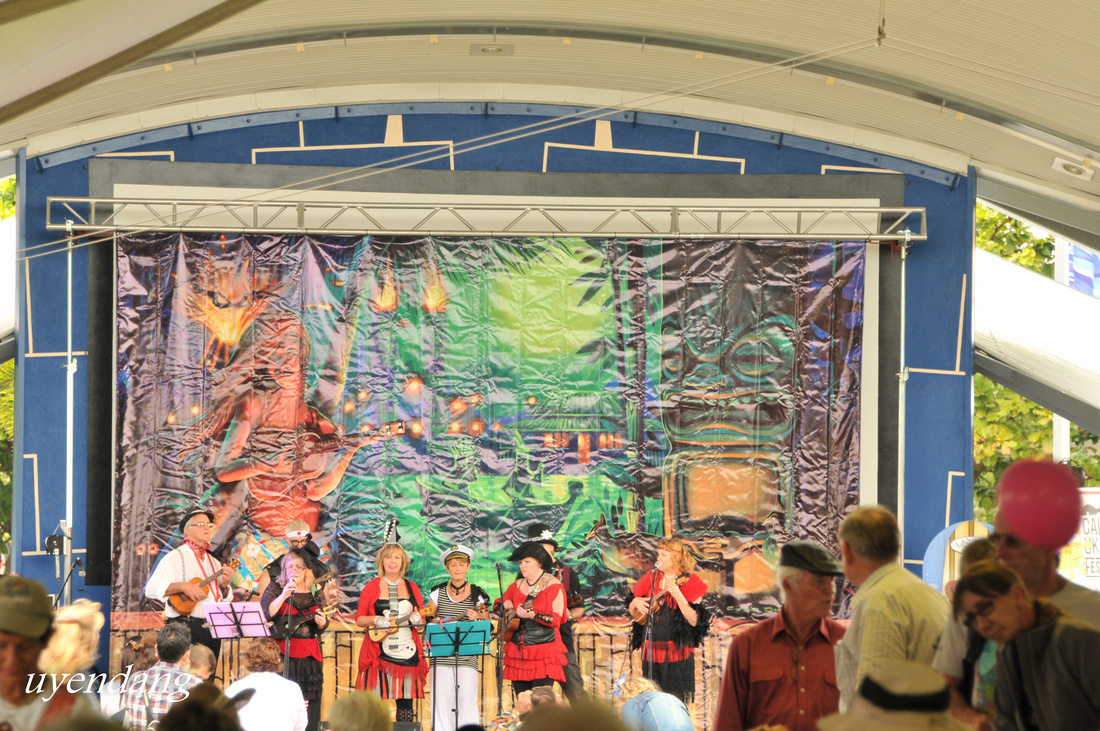 It was so funny how one of the ladies with the chord sign was out of synch with the ukulele lead player. It took a bit of time for the facilitator to group all the people color-coordinated bands into their assigned locations. But once they got started practicing and the next thing you know they were playing the designated record song. 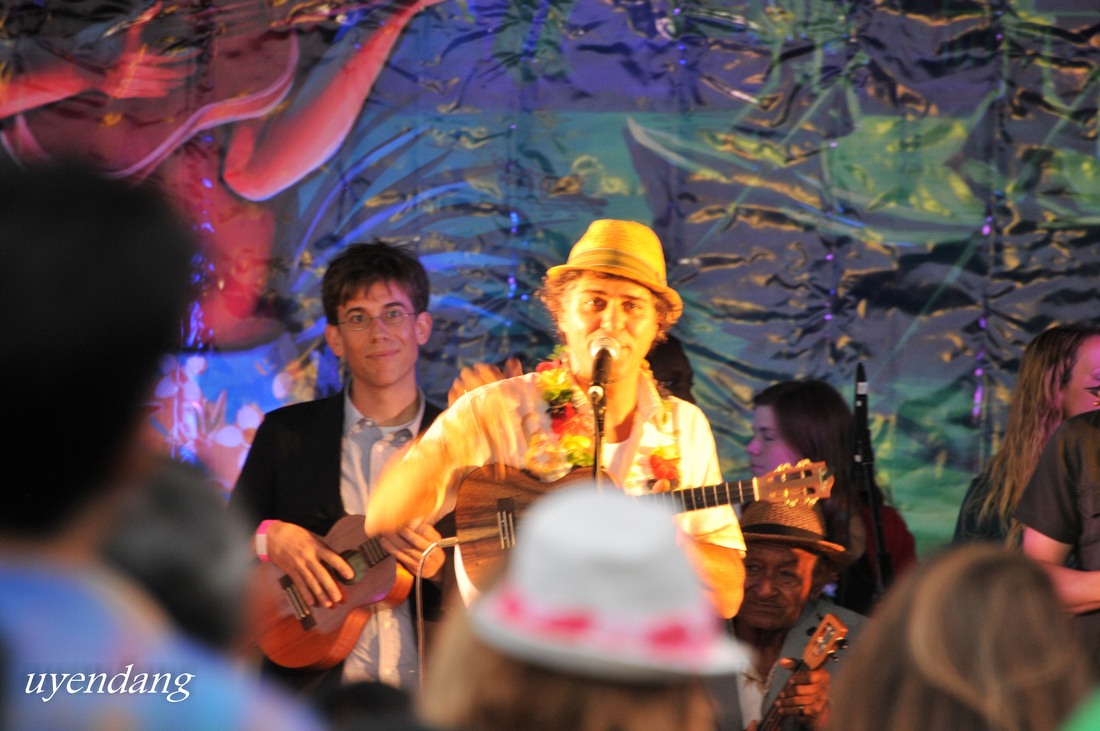 After the five minute song was over and the crowded cheered, it took them no time to get the rough count. Unfortunately, they were just about 200 shy of the world record as I later found out in the news http://www.perthnow.com.au/news/national/cairns-falls-just-short-of-world-ukulele-world-record/story-fndor8bb-1226420773065.

But I love being apart of the local festival and flare of a city, and this was a nice happen-stance thing that I would have never been able to plan for, so this was my favorite part of my visit in Cairns. Here are some of the other pictures from my first few days there. 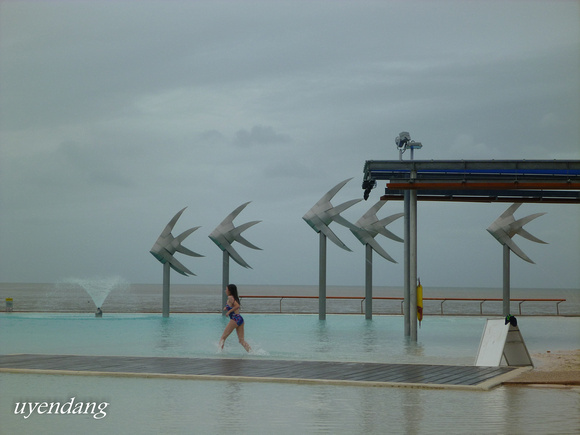