So the weather during most of my time in Cairns was quite rainy and cloudy. My first full day of sight-seeing was a tour of the aboriginal Tjapukai center, a ride up the Skyrail to Kuranda and train ride back down. 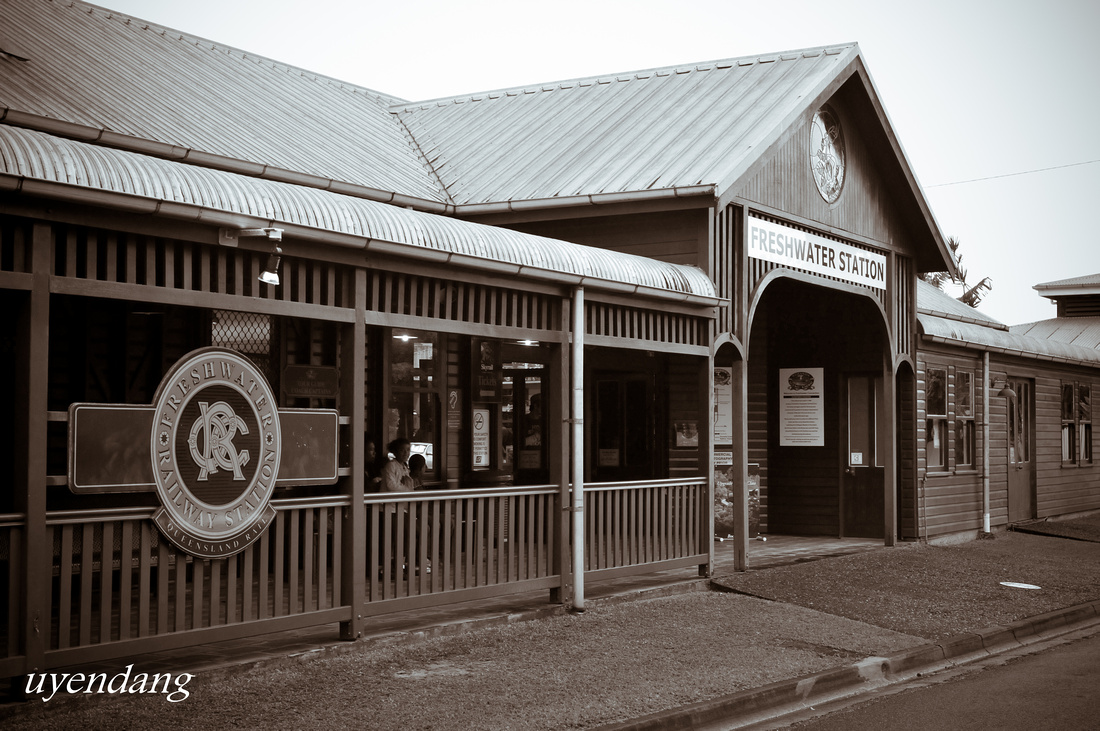 So it was a busy day starting at the Freshwater Rail station where my tour company was picking me up. It had that tour of the century feel to it. The driver who picked me up mentioned that I have to keep a move on the day to be able to hit all the high points of my tour (he wasn't wrong about it either). 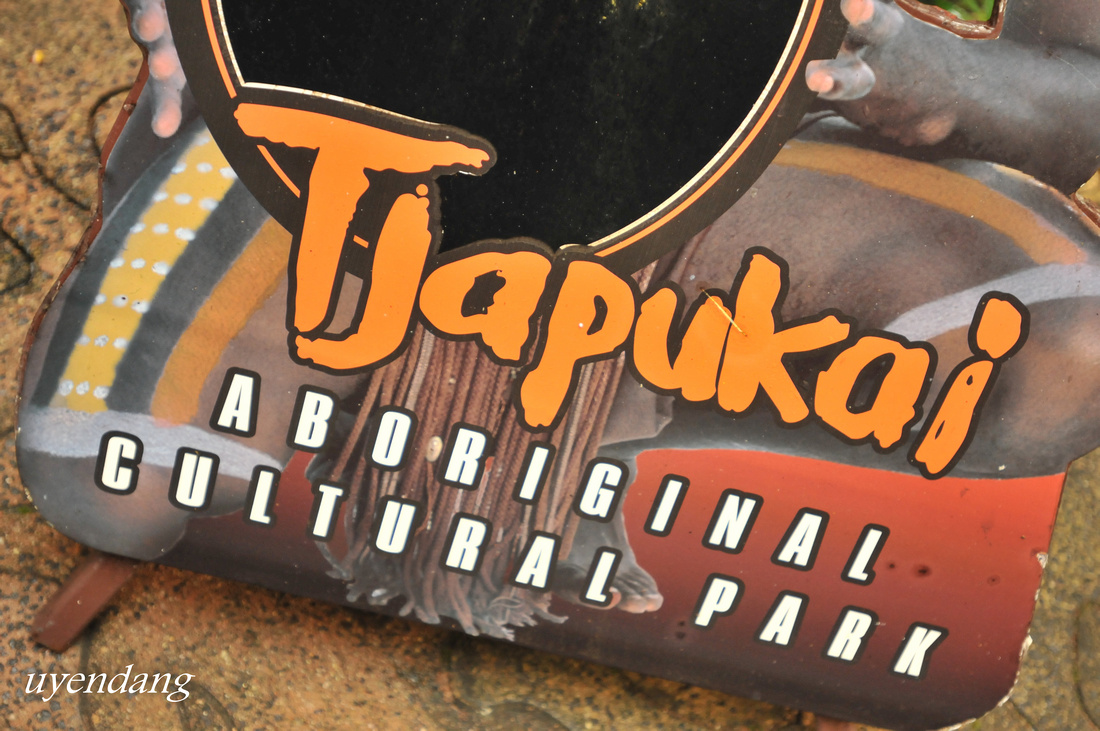 When I arrived at Tjapukai, it seemed like there was no one there except me and the workers. I had some time at the gift shop to browse before one of the native Tjapukai workers approached me to tell me about the art work. After listening for a few moments I gave in and purchased a two returning boomarangs. When I headed over the bridge to the theater, I was the first to arrive and was wondering where are all the guests? Will the show go on as scheduled with just me? Chilling for a few moments on the bleachers, the next time I turned around a crowd of tourists was fast approaching over the bridge into the theater.

Thank goodness, I would have felt bad for the performers if they only had me to watch their dances. Something about native tribal dances that are so fascinating to me. Perhaps I just love the interesting rhythms of their native songs. Or maybe because when native people dance they don't seem to be held back. After the performances, they had another instructional demonstration of the aboriginal didjeridoo. I have a greater appreciation for their skills after hearing about how the sounds are made to perform it. 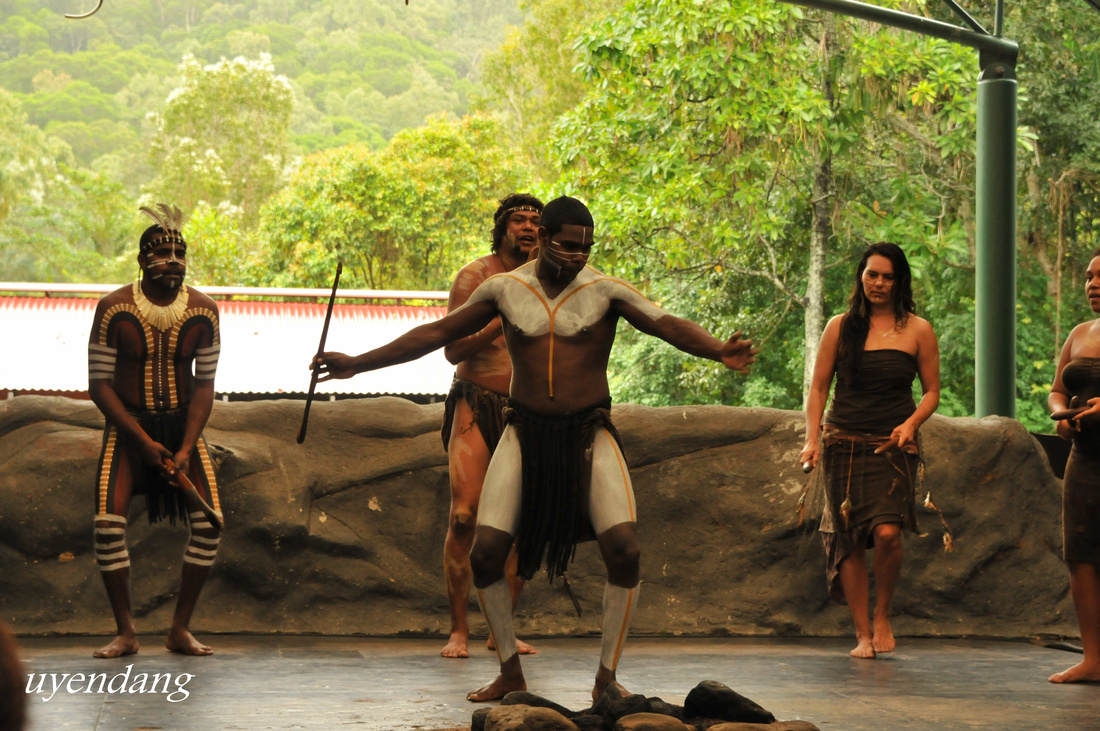 Having to keep up with my set schedule, I headed quickly over to the Skyrail which is supposed to take me up to Kuranda. On the first leg, I was able to sit an a gondola on my own. Normally I am not afraid of heights, but this time being in a gondola on my own I think my imagination got the best of me. As I ascended into the beautiful fog covered mountains, my engineering mind starts to ask questions like, where is the support cables for lateral wind shears? How long will it take to drop to the rainforest floor? Needless to say, at the next transfer while I was in line I politely asked the mom and daugther infront of me if they mind letting me ride with them. 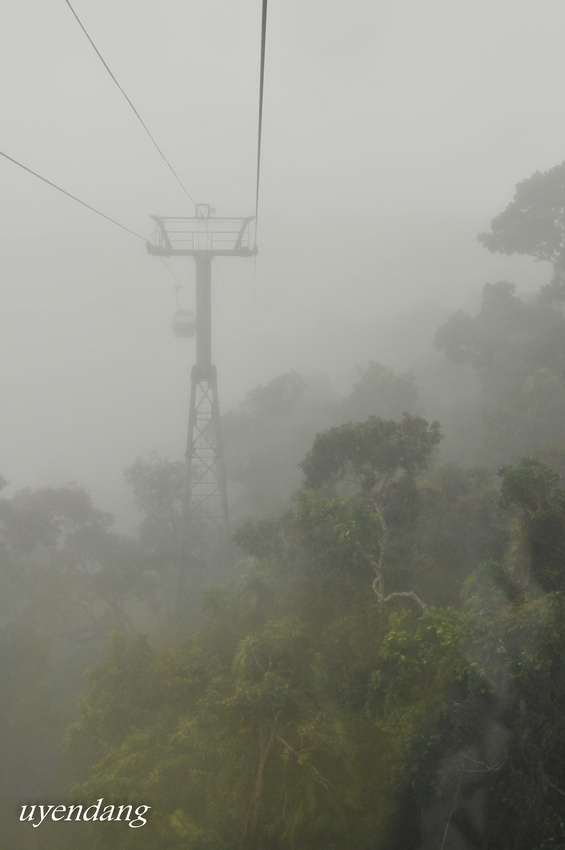 One thing I love about traveling solo, is that people are open to be helpful to a single traveler.  The mom was German, married to an American who I believe are now living in New Zealand. They were visiting Cairns and the husband will be joining them soon. Also the daughter will be going on an adventure program next year to Southeast Asia which will include a time in Vietnam. Having the conversation with the two women helped to keep me distracted from the trip and how high we were. 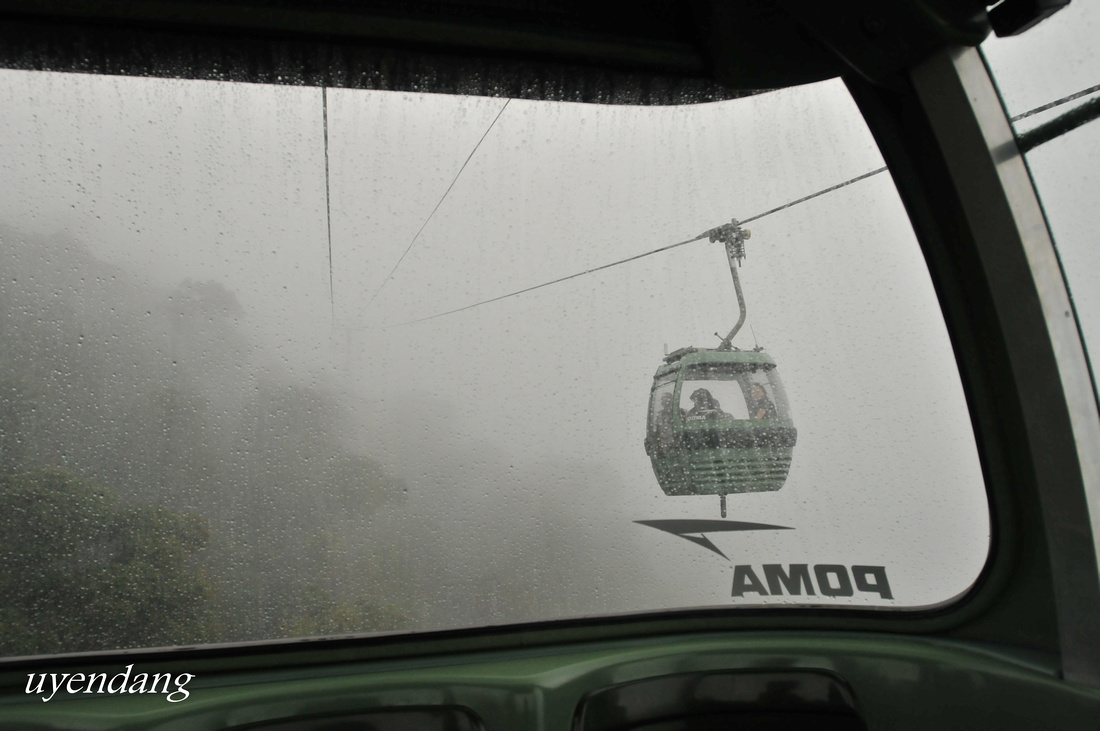 In Kuranda it was on top of a rainforest. Rain it did indeed, so much everyone was buying ponchos to step out of the gift shop. Now armed with my new umbrella, I had to wade through there were plenty of hippie shops and pastry cafes. My goal was to cuddle a koala bear and get near a kangaroo of course it was over priced but it will be my only chance. Finally I got to the Kuranda Koala garden to stand in queue behind a family of six who ALL wanted their pictures individually taken with the koala. They were adorable I must say, and I think they smelled like eucalyptus. I got my touristy photo-op with the fuzzy bear named Harry :) 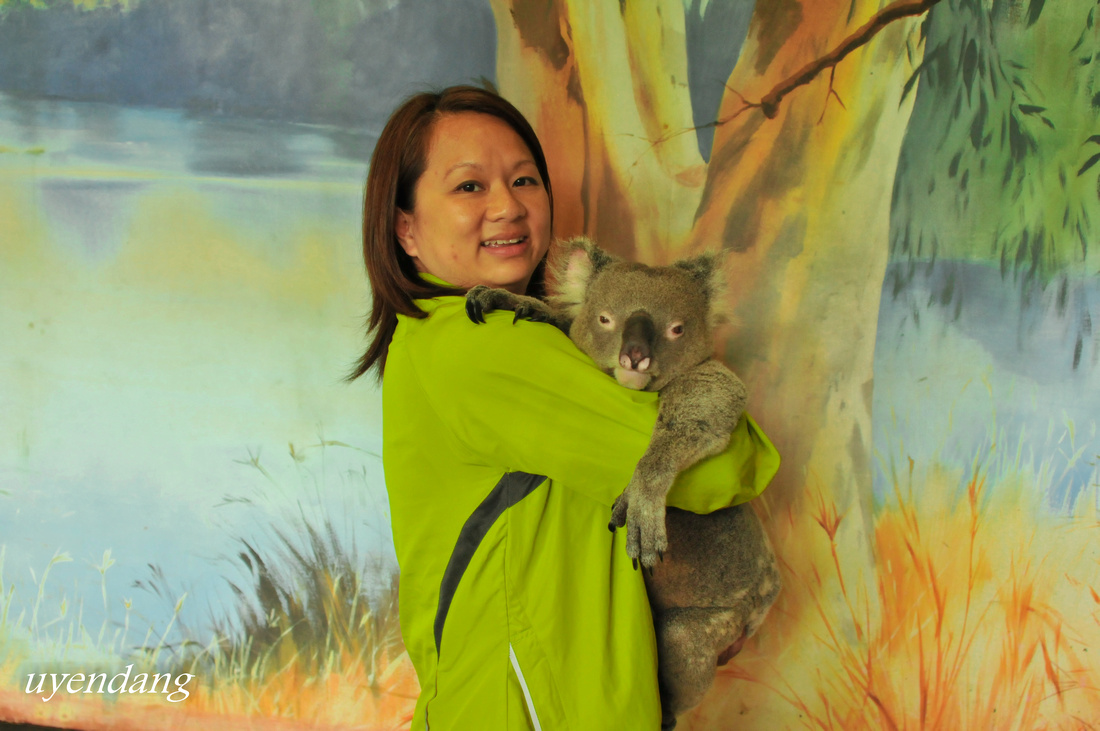 I also got my shot with the kangaroo, poor thing were so unanimated in the wet rain. 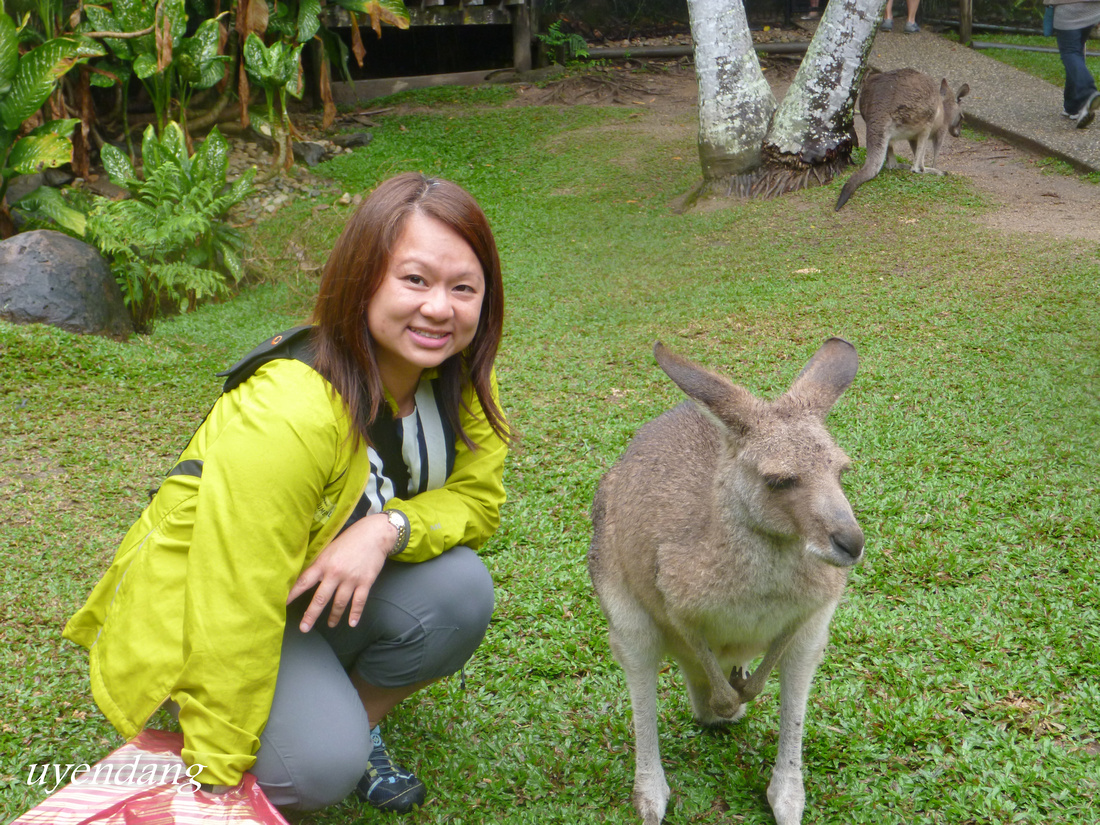 So it was time to make my way to the train which would be a 2 hour ride back down the mountain. The gals had recommended that I try out the Devonshire tea and scones, that was my next objective. But for some reason that hour of the day, the pastry shops that I had noticed the tea advertisements earlier were closing shop. And I was worried that I would not make it to the train station on time. So my made my way back there to see if perhaps I can get something to snack on before getting on the train. By that time I was hungry. And those of you who know me knows that is not good news. ;) Standing in line I finally was able to order my tea and scones. The scones in Australia are similar to a big sweet southern biscuit. It has the same texture and thickness, but not as salty or buttery. They spread a heap of strawberry jam and piped a huge hill of whipped cream on top. That combo so hit the spot. The tea warmed me up and the scone's whipped cream topping was heavenly. 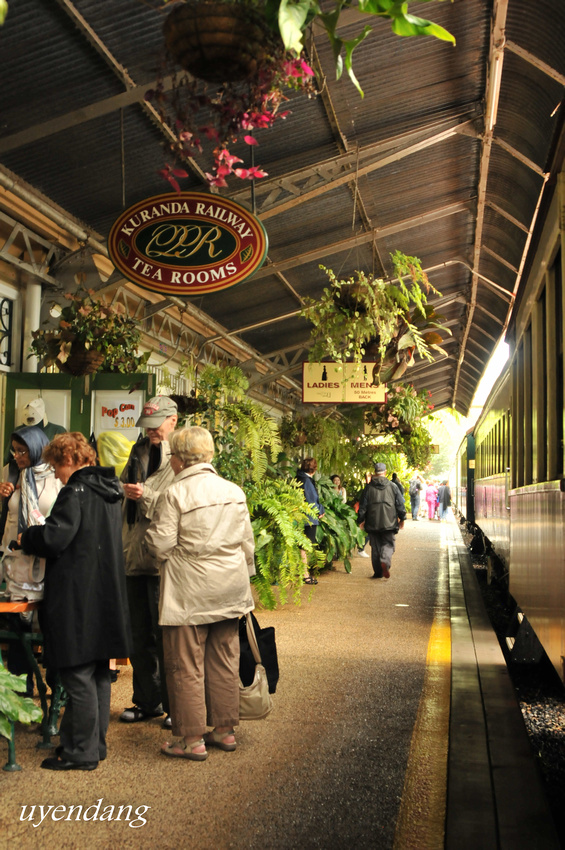 I hopped on the train to get back to town. Now one thing I started to notice about myself on this trip - freaky sounds tend to shake me up. I blame it on the movie industry where those omnious sounds trigger a forshadowing of impending doom. Since the railroad tracks were really wet from the rain, I think it enhanced the screeching noises it made going down the tracks. Also I think the sounds of roller coasters tracks going up a hill then suddenly stopping, riders usually anticipate the upcoming drop on the ride. So it was with my train ride - my imagination getting me unsettled. The fog, attitude, and age of the train did not make me comforted either. 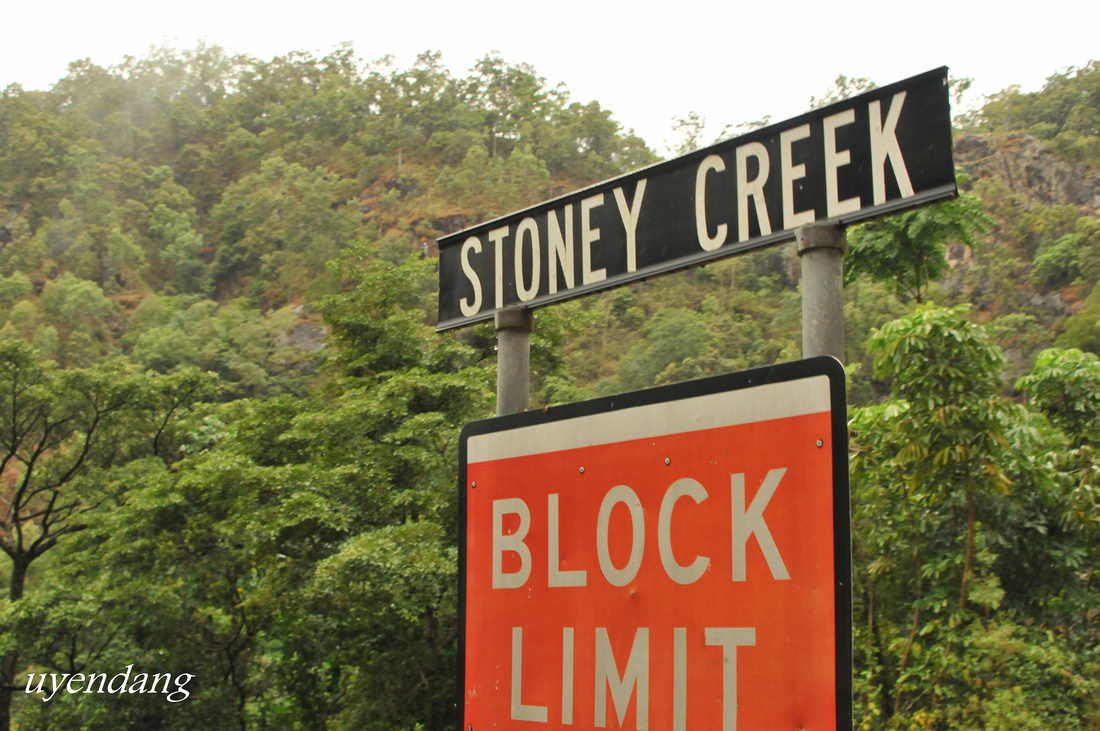 Midway through the ride the pre-recorded guide brought our attention to Stony Creek falls and bridge we would be approaching as great photo opportunities. And sure enough it was worth the ride down the mountain to experience it. The train stopped on the bridge long enough for you to take a full picture of the train over the tracks and hillside. 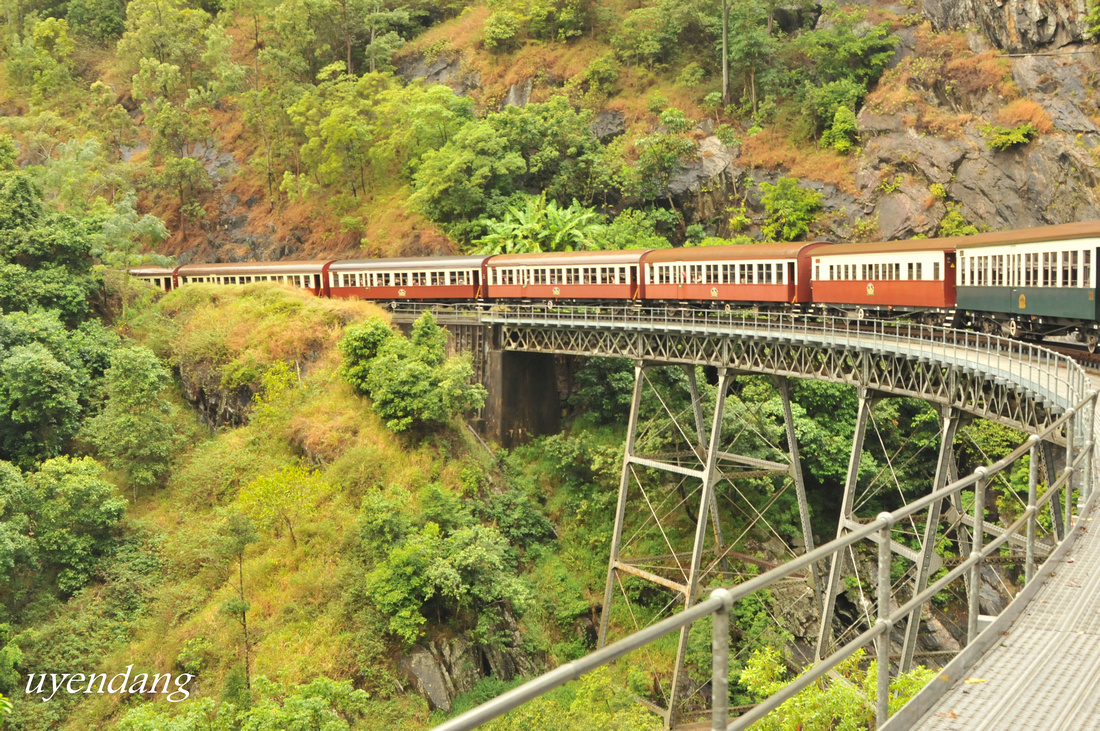 On the opposite side the view of the falls were upclose and personal which really made the trip by train worth the ride back. 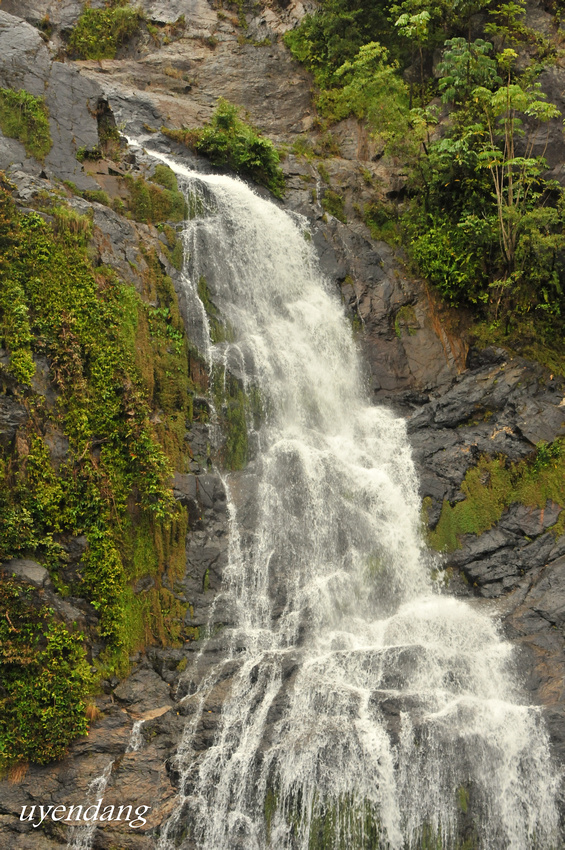 Here are some of the other pictures from that excursion. 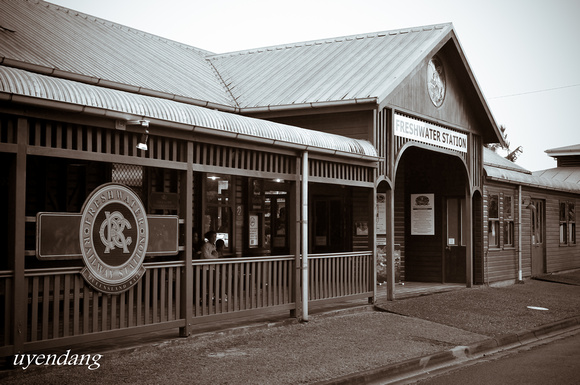