One of my resolutions for 2011 was that I would like to climb Mt. Fuji sometime that year or the next. Throughout the beginning of 2011 I was praying about it and even got some people interested in joining me. However, March 11 happened, and that door closed for me.  Because of the interest in climbing Mt. Fuji, this was the doorway to open my heart to the people in Japan.

So when I was initially planning for this trip, I did not initially think I would climb the mountain feeling physically untrained for the endeavor. But deep inside I wanted to still climb it. So a few days before finalizing my trip, I arranged it to make the climb on a fullmoon lit night and summit on July 4th (God willing). My hope and prayer was that I also had people to join me on the ascent.

While I was at Grace Mission Tohoku chatting with the gang about my trip plans. Lisa was just as thrilled about my climb as I was so I invited her to join me. I initially didn't think she was serious but sure enough by the next day when she mentioned the idea to her mom they were supportive of the climb too. I didn't know how much of an answered prayer her accompaniment was until the climb.

So we had arranged to meet at the hotel at Kawaguchiko on the day of the ascent. Upon my arrival it was pouring down rain and I had no idea what direction to look to even find Mt. Fuji. As I asked the receptionist about the bus ride to 5th station she said I had just missed the last one about 30 minutes ago. My hopes to climb Mt. Fuji that day was fading and I started to think about what plan B would be.

Just moments after they allowed me to finally check into my room, Lisa arrived all gunho to climb the mountain. Even though I had broken the news about missing the last bus, thankfully Lisa had a different bus schedule than the one the reception gave me. Her schedule indicated there were a few more bus runs that evening. So we decided to get some food before going to the station to check out if there was another bus run to the 5th station. 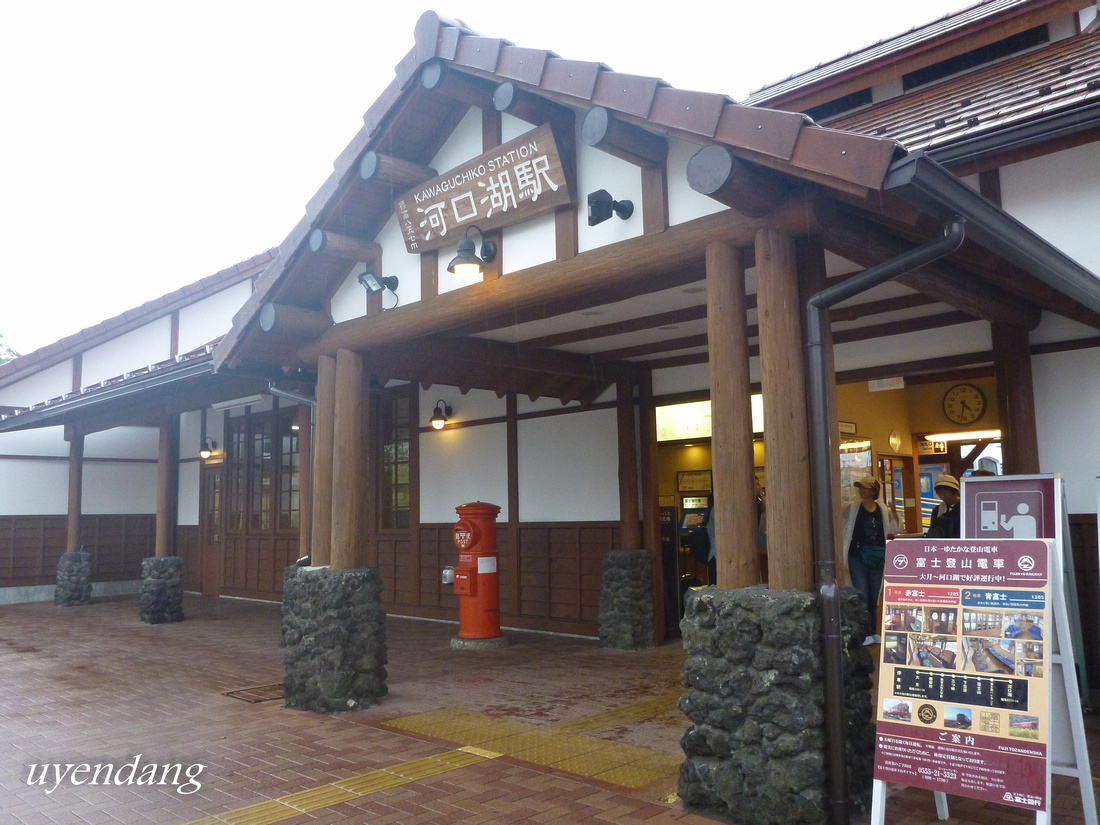 When we arrived at Kawaguchiko station and found out that we would be able to catch the next run to the station, there were only a half a dozen people on the bus going to 5th station. At 5th station virtually all but one shop was closed and no guides or information desks around to ask where we were to start.

At this point we were just walking around to determine what direction to head. This is when Sid, who was on the bus asked us when were we thinking about heading up the mountain. We told him that our plan was to climb for a few hours and then stay in a hut for another few before ascending to the summit for sunrise. Figuring out there's no turning back, the three of us embarked on our journey up the mountain. 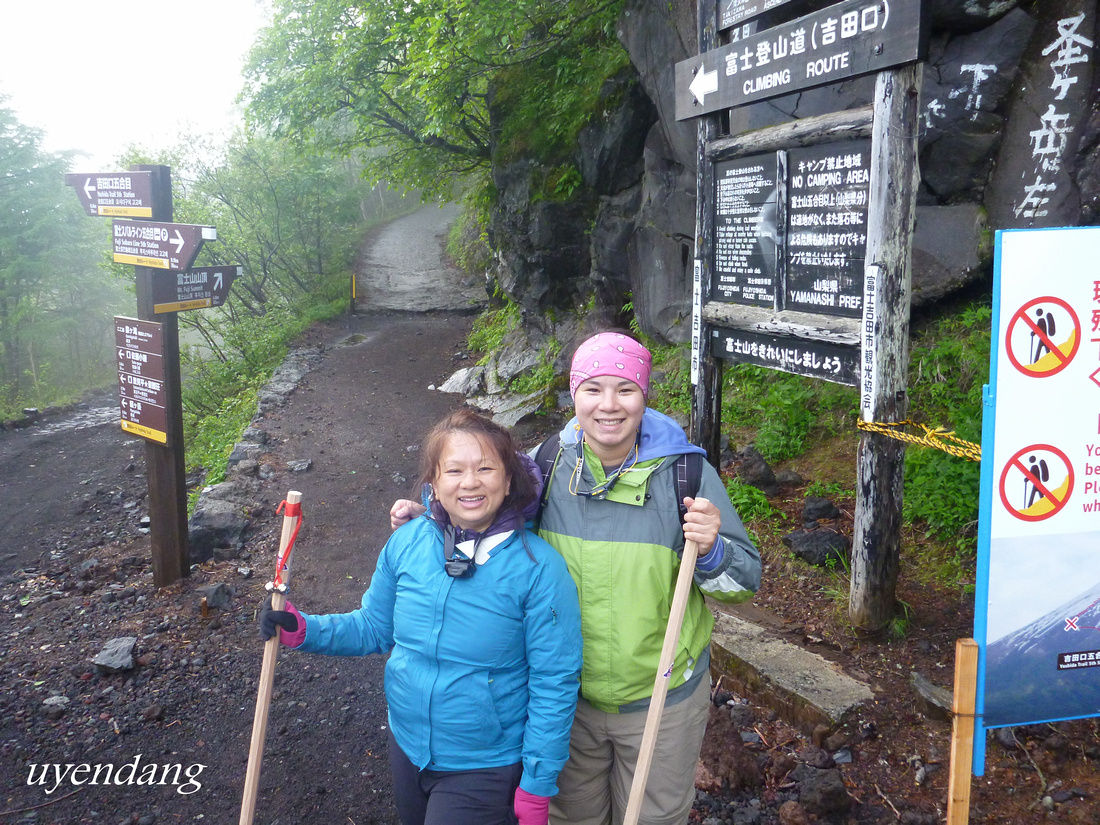 The side trail was easy downhill walk to the trail head a mist the enchanting misty forest. We were greeted by weary descending travelers who seemed to not be thrilled at our cheery konnichiwas. One of the people we chatted with was a woman who just celebrated her 59th birthday making it to the top of Mt. Fuji. Her encouragement spurred us forward.

As evening fell and we were making it up higher past the cloud blanket, the misting had stopped, and the full moon broke through the veil of the clouds. It was breathtaking and lighting our path as we were reaching closer to our first hut. Lisa was leading the way and of course my small steps starting to get more noticebly paced last. And Sid was kind enough to wait for me at the back.

It reminded me of the proverb about friendship if one were to fall that they would have someone to pick them up. Usually this is the beginning of the hiking season for Mt Fuji and I was expecting to have seen more people going up the trail. However, we had only seen a handful of people in the first two hours. And I was beginning to realize how it would have been foolish to go up there alone as I had planned and truly appreciated the answered prayers.

The good thing about night climbing was we could not gauge how far we had to go, just that we had to get to the closest lit hut or station. So we were making good progress. Except as the climb became steeper and more rocky, my souveniour walking stick became cumbersome to use as it was easier for me to propel and climb up with both hands rather than one had free. I was starting to feel the exhaustion set in. By this time in the climb, I had been up since 5 AM, traveled 6 hours to get to Kawaguchiko, and had hiked about 2-2.5 hours up the mountain and the winds were picking up. 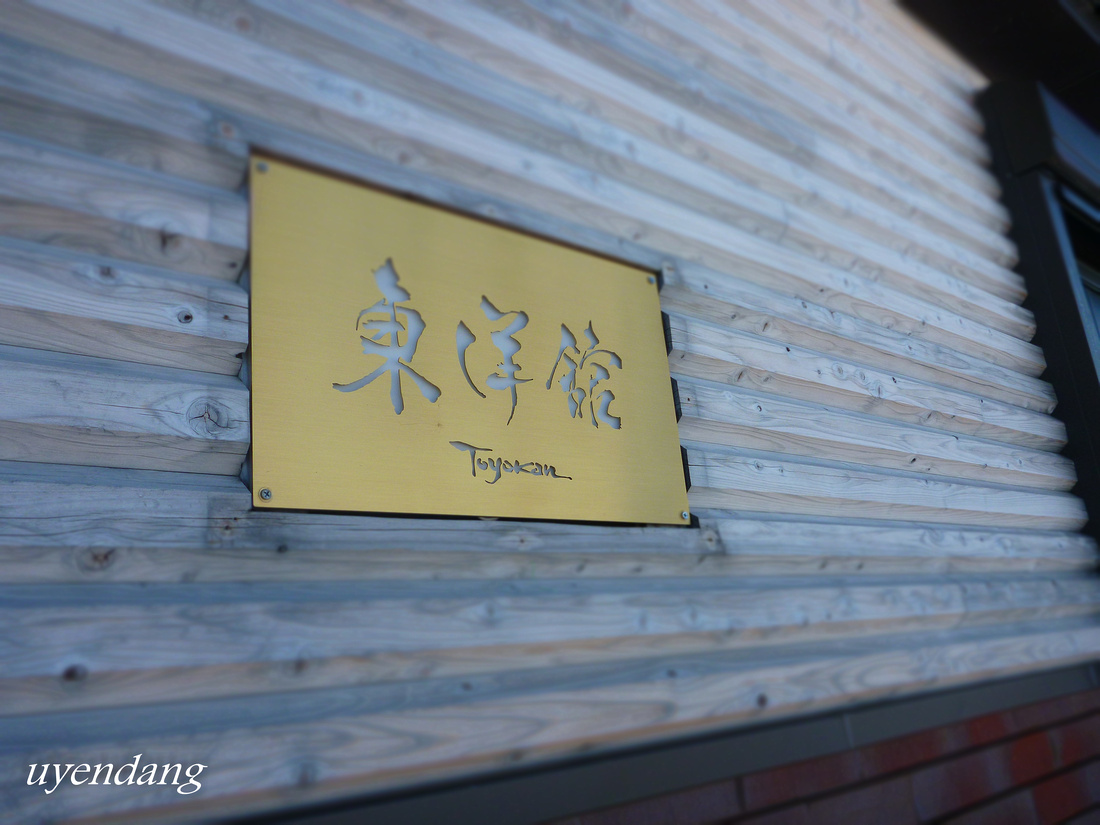 I was ready to find a hut that would take us in. Somewhere after the 7th station at 10 PM, we found Toyokan hut. Thank goodness for Lisa's Japanese skills she was able to communicate with the hut caretaker to let us stay the night.  Our goal was to sleep until 1 AM and climb the 3 hours to see the sunrise at the summit at 4 AM. The Toyokan hut was very clean and deceivingly large with room they lodged us in probably holding about 20 hikers in it. I was so relieved to be out of the elements and so ready to climb into the super thick comforters.

Very much aware of my surroundings I could only half sleep there, and when I heard the rustling of the other hikers it passed my mind that they would have been likely waking up at 1 AM like we were. Knowing that Lisa set the alarm for 1 AM, I was in no rush to keep us on schedule. At this point I really just wanted to get some rest in. When we finally awaken, we realized it was 4 AM and the entire room had emptied out.

When I thought it was glorious to be on the mountain in the evening, it was magnificant to be up there in the morning even though we were only past the 7th station it was well above the blanket of clouds. But unlike our sense of perception was limited in the night climbing, this time we could fully see how much higher we had to climb. And as we turned the corner from our Toyokan hut, it was like wow! We have 3 more hours to climb and the rocks were steepier than the ones we had climbed the night before. 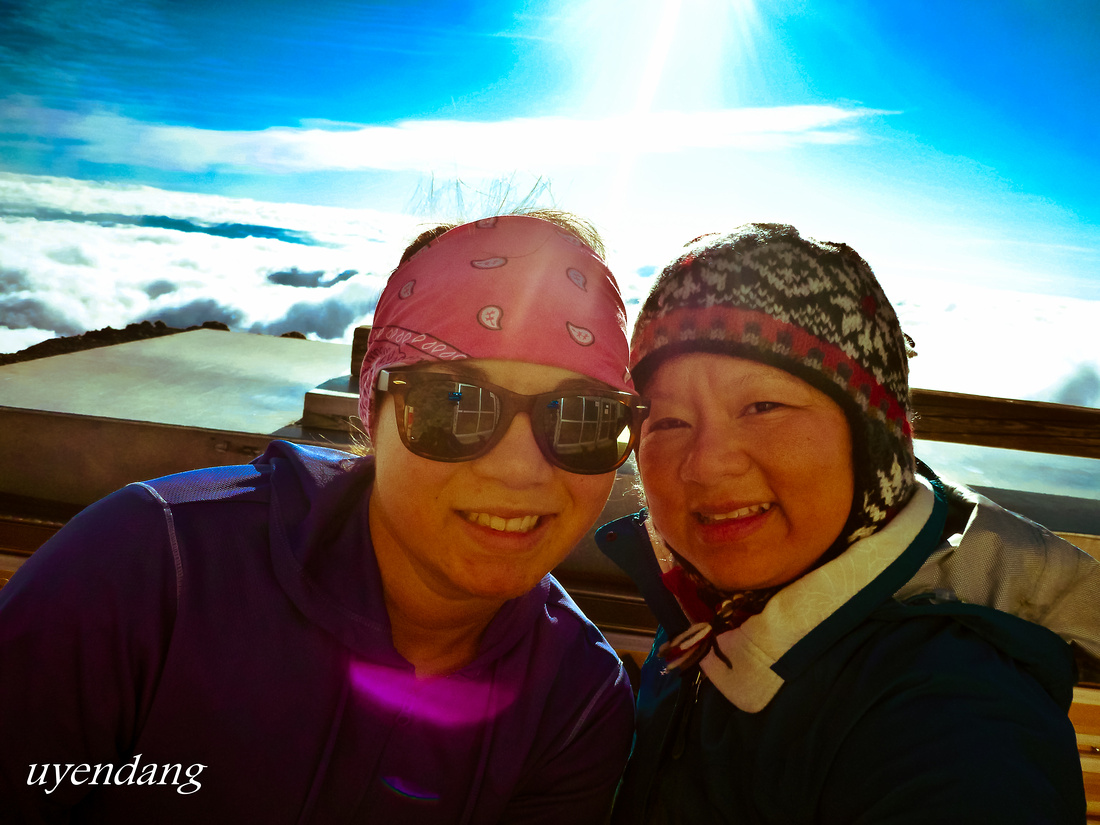 This is when I started to think, "what did I get myself into?" thinking about how I will also have descend back on these steep rocks. Also as we climbed higher the altitude and oxygen depletion was affecting my ability to keep pace with her pace. Lisa all the while was a trooper. She just had to keep me encouraged to get to the next station.

We bumped into Sid on our way up as he descended down from the summit. He had proceeded with two other chaps to the top over night while we had slept through the night. He warned us that the last 200 meters will be tough but worth it. And I was thinking if we just got past the steep rocks, what else will we encounter? My doubts on my physical ability to make it to the top was growing louder. This was when I had to keep praying for the Lord to help me to get to the top, or singing United Pursuit's "I will climb this mountain with my hands wide open," or consider how Moses climbed the mountain to meet up with the Lord. My spirit was willing but my flesh is weak. This may come easy to others, but ask Lisa. I was huffing it. And the scary parts were the switchbacks where we would experience this strong gusts of wind, which I was terrified of literally being blown away.

And somewhere along this route Lisa asked me about my hurt knees from the fall back at the mission. Amazingly my knees were not a bother at allI finally developed a pace once we got to the stretch were it wasn't as many big rocks. Take ten steps then 5 second stop. Repeat. It helped me to just move forward, even though at times we would fall behind this group of guys or others move ahead of them. I got comfort as we started to reach close to the 9th station and there was a long line of school kids who were lead by Mt. Fuji guides. We were slower than the marker estimates because we had hit the bottle neck and I was definitely feeling the affects of the attitude. 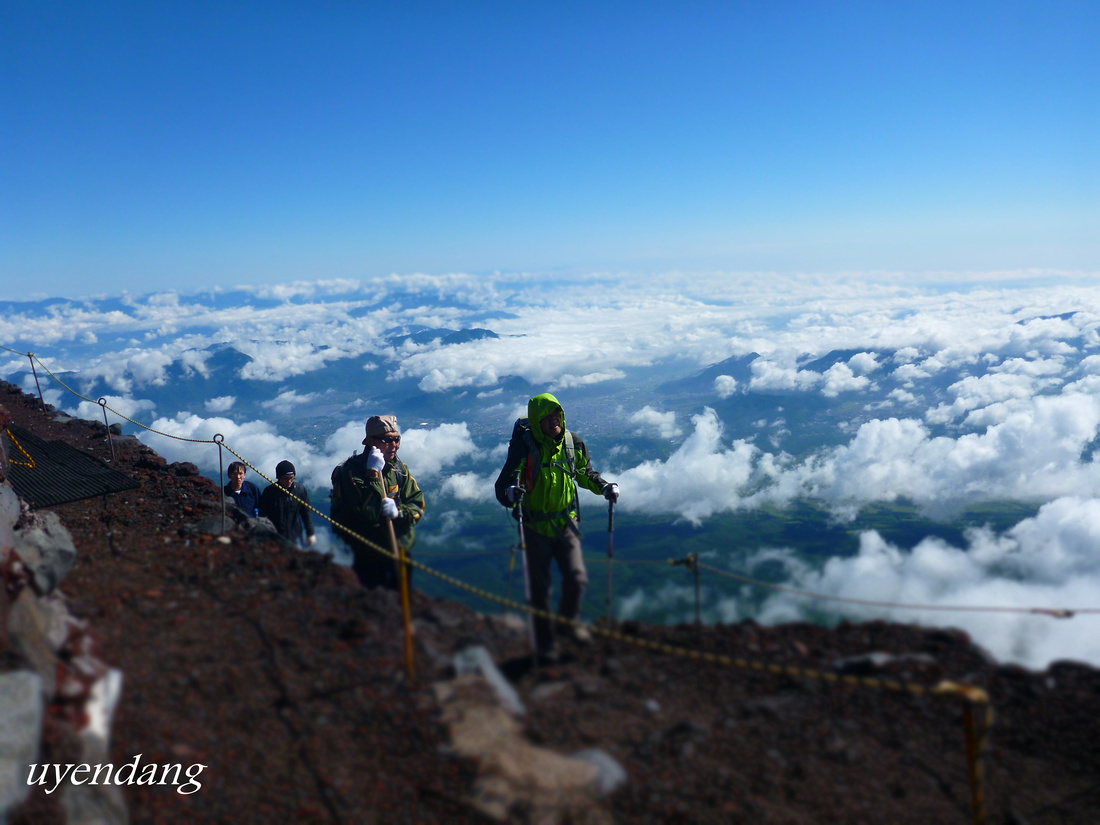 At this point, the "how much further" syndrome set in. Luckily another American we chatted with eariler was coming down from the summit told us we were close. And that it was just a little beyond the last shrine we can see. Mustering up our last wind to make it to the top. At 10:00 AM we arrived at the top we made it! Completely spent, I had to lay my head down on the benches at the top. I got the shot of Lisa with her walking stick and Japan flag. Then I took out my little American flag in honor of Independence Day. Lisa had the brilliant idea to display both flags and lent me her flag. 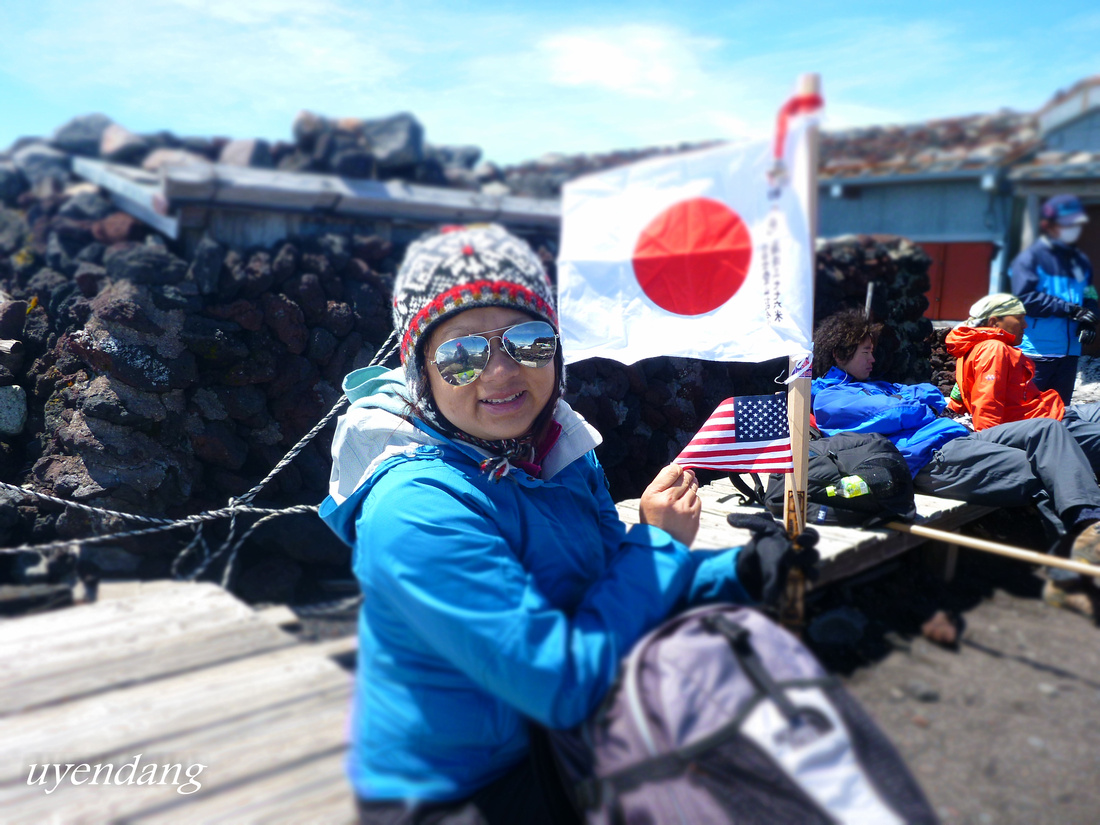 We ventured over to the summit marker and crater. It was remarkable to be at the highest point in Japan - 3776 m/12,388 feet. 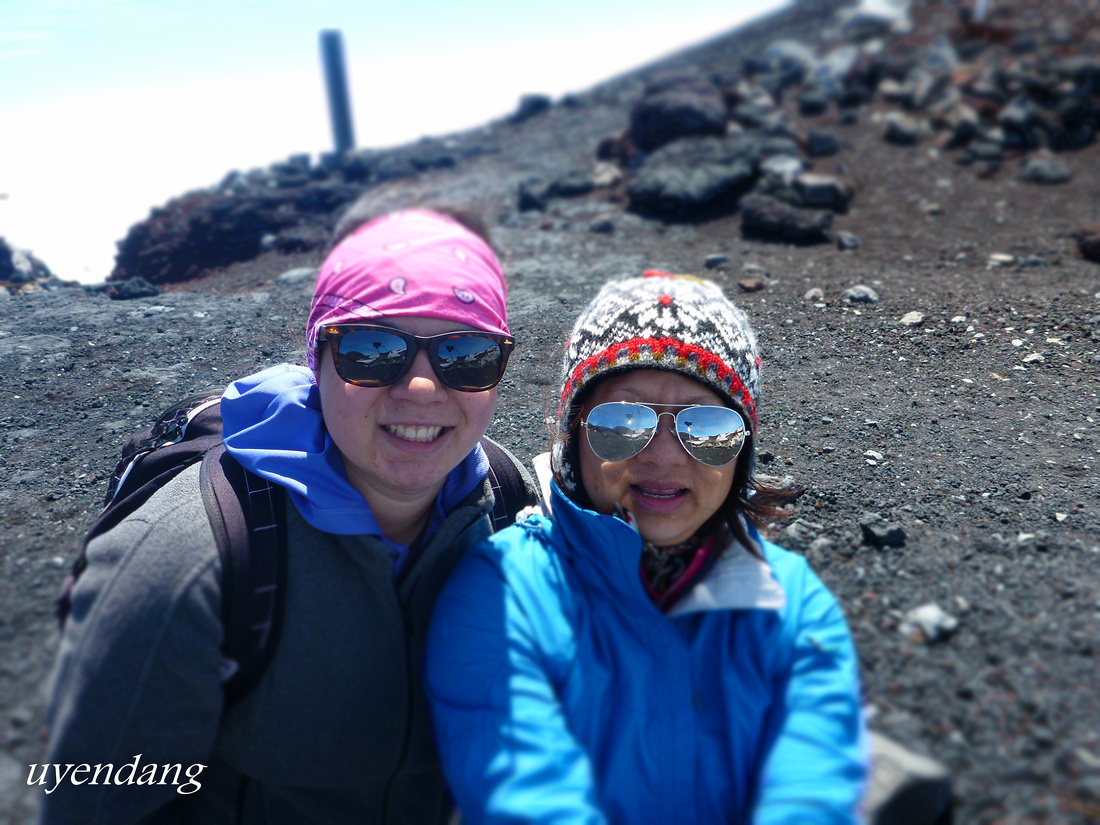 Now for the trek back to 5th station. Due to the snow that was still on the return trail the only way back was through the trail we used to climb up the summit. Lisa's aunt had warned us that going back was harder than going up because of the gravelly rocks were so unstable. Not only did we have to contend with that, but the steep rocks too. Instead of the typical 3 hour descent, it turned out to be 6 hours to get back to 5th station where the buses were.

Loose rocks made our feet slide, and going down the walking sticks were helpful to steady myself. But with my feet sliding under me, I tried to break the slide and each time feel like I was stubbing my big toe in my boots. Over hours of this it got bruised and sensitive to each slide. But it was so much more rewarding to go back knowing that I had made it to the top rather than having gone 2/3 ways up and turning back (which I had considered).

Truly it was a test of perservance and demonstrated how much we need people around us to cheer one-another onwards especially in the moments of discouragement (both on the trip up and down). It also tested me on whether I will reach out to Him for his strength or by my own strength. But through it all, I see his hands all over this journey and I hope to see more of it for the rest of the trip. 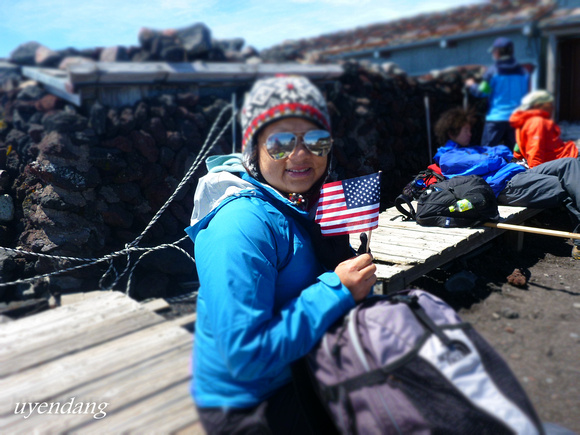